The Boy Next Door, Taylor Foxx 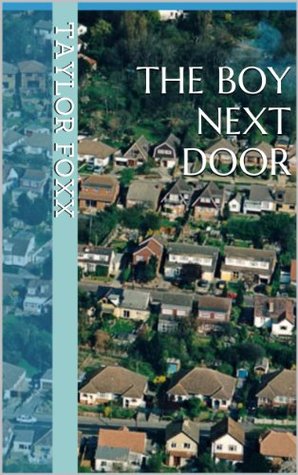 This review contains spoilers. I tried to keep them out but there was no way to type a full review without giving some things away. Also note that there is one particular scene in this book that some might consider outside of their comfort zone and disturbing to read. It is not listed in this review except in passing, but it should be noted. Keep that in mind before reading this book.

When the Roths move in next door, Lyle is immediately enamored by the three guys in the family: Jacob Roth, the handsome father; Kevin Roth, the rambunctious older brother; and Marcus Roth, a wild and friendly boy his own age.

As Lyle grows up, his relationship with the three men changes drastically. Each member of the Roth family teaches Lyle a new lesson about love – both carnal and romantic. While navigating the difficult waters of gay teenage life in small-town New England, Lyle must learn to balance his relentless libido with his confused heart.

When Lyle is twelve, Jacob Roth, and his two sons, Kevin and Marcus, move in the house next door. Kevin is a few years older than Lyle but Marcus is the same age. Lyle and Marcus become fast friends and before long, Lyle is spending more time at their home than his own. Kevin is kind of a jerk, but that doesn’t stop Lyle from being attracted to him – and to Marcus – and to Jacob. He’s on the cusp of puberty and has realized for sure that he’s gay, so being around all the Roths makes him have more than a few uncomfortable *ahem” moments in their presence.

Lyle’s story is told, at first, as your basic coming of age story. It is told with Lyle in the bathroom after a shower, as an adult, thinking back to specific memories over the previous few years.  I’ll be the first to complain about flashbacks in books, but this one seemed to work. Actually, it was probably the only way the story could be told. The here and now and the going back are both easy to distinguish so there is no confusion for the reader.

Lyle experiences all of his sexual firsts with a different member of the Roth family at different times during his teenage years.

Yes, all three of them.

First, there’s Kevin. At first, Kevin is a bit hard to read but it doesn’t take long before the reader can tell that he’s pretty self-centered and only cares about himself and his own needs. Lyle and Kevin’s secret relationship (though I use the word relationship lightly) takes place over a period of a summer while Kevin is home from college.  Lyle is farther into his teens at this point, though I don’t recall the actual age being given in the book.

Actually, I was confused more than once on the age of Lyle during certain situations. I’ll come back to that.

Then there is Jacob Roth, the patriarch of the family. He and Marcus and Kevin’s mother had a very nasty divorce and this forced him to move himself and his boys from California to New England. Not a whole lot is said about the mother but there’s enough to show that she would never win wife or mother of the year awards. Neither Kevin nor Marcus want anything to do with her but are forced to do the visiting thing on occasion. During one telephone argument when Marcus doesn’t want to visit, she bribes him and, being the teenager he is, he agrees to visit for a summer. Kevin, who had already shown his true colors with Lyle the summer before, is also away so this leaves Jacob completely alone in the big house… and lonely.

You totally see where this is going.

Lyle is much older at this point though, again, the age thing was confusing. In one instance during this particular summer, it states that he is nineteen but yet he’s nineteen when he’s doing the flashback thing in the bathroom much later so I was left confused – again. I finally stopped thinking about the ages of the characters and just went with the story.

Lyle and Jacob have one hell of a summer while Marcus and Kevin are away. While Kevin gave Lyle the experience of sucking cock for the first time, Lyle loses his virginity to the much older Jacob Roth. Their relationship (again used lightly) ends when Marcus comes home from the visit with his mother and things don’t go well for Lyle. Marcus brings a boyfriend home, Kevin (who also shows up again) has a steady girlfriend and Lyle is lost.  He’s feeling guilt over the things he’s done with Kevin and Jacob when his heart belongs to his best friend, Marcus. Now Marcus has a boyfriend when Lyle didn’t even know the other boy was gay. An uncomfortable (to put it mildly) dinner with all of them ends the relationship and friendship completely for several months.

Then there is Marcus, Lyle’s best friend and the one he really wants. Marcus and Lyle had been inseparable for years until Marcus went off for a three month visit with his mother before the start of his and Lyle’s senior year of high school. Later (much later) Lyle is able to experience another sexual first for him with his best friend. I’m not giving that one away but it was pretty hot.

There are secondary characters who add to the story. While important in the grand scheme of things, they aren’t in the story much. This is mostly all about Lyle and the Roth family.

There are severe editing issues throughout this book and a few inconsistencies, but not enough to take away from the story as a whole.

Overall, a very good book. I enjoyed watching Lyle as he came into his own with his sexuality and then later discovering what (who) he really wanted. The reader is literally watching him as he grows from being a twelve-year-old kid to the nineteen-year-old man he becomes at the end. The sex is beyond hot, and while this story might not be for everyone, I enjoyed the hell out of it.

I look forward to reading more by this author. I would love to see more of these guys down the road. The story ends with a HFN ending (and one – if you think about it – makes complete sense) but I’d still love to see Lyle and the Roth family again.

Sounds like a sexy read… and keeping it in the family.

Thanks, Kazza. It was really a good book but it won’t be for everyone. I look forward to more by this author.

Cindi – thank you so much for your kind and thoughtful review of my novel! I greatly appreciate the feedback I hope you stay in touch and keep an eye out for my upcoming novels. I’ll find you on GoodReads. Thanks again!

You’re very welcome, Taylor. Not only is it sexy, but it has a good story behind it. I really look forward to reading more of your work.