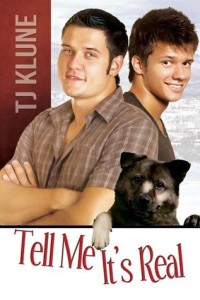 Another outstanding book by TJ Klune.

** This review has what some might consider to be spoilers.  There’s only one that could be classified as such so keep that in mind before reading the review.  **

I have a long list of favorite authors but only three who are on my auto-buy list.  These three can put a book out and I know I will be buying it on release day or pre-ordering as soon as that becomes available.  I don’t have to read a blurb.  I don’t have to read the authors’ blogs.  I know I will buy the book regardless because these three can not write bad books in my opinion.  TJ Klune is one of them.  I fell in love with his writing when I read Bear, Otter & the Kid way back when.  I fell more in love when I read Who We Are, the sequel.  That love was cemented with Burn.  When I found out about Tell Me It’s Real, I placed a pre-order within seconds of being told I could.  I’m a huge fan and I have no doubt that I will be for as long as Mr. Klune keeps writing.  Anyone who can having me giggling one second and crying the next has amazing talent.  This is TJ Klune.  He definitely did not disappoint with Tell Me It’s Real. Thankfully (unlike his other books) the crying parts were kept to a minimum.  Don’t get me wrong, they are there but not to the same extreme as in Bear, Otter and the Kid’s world. For that, I am grateful.  I needed light and funny and I got that with this book.

Paul Auster is shy.  He’s also a little overweight.  He has zero self-esteem and self-confidence.  What Paul sees when he looks in a mirror is a plain, boring, overweight man who is not worthy of anyone that special.  His house is supposedly haunted by a menstruating ghost (according to an old boyfriend, a so-called psychic).  He adopts a two-legged dog and names him Wheels because of the cart attached to his body that allows him to move around. He has a somewhat psychotic family.  His parents are a bit too accepting of their homosexual son.  He has a grandmother, Nana GiGi, who has a homophobic parrot named Johnny Depp.  Paul’s best friend is Sandy, whose alter-ego is a drag queen named Helena Handbasket.  Paul works a boring job at an insurance agency.  He has an average sized penis, plain blue eyes and black hair that looks like a poodle died on his head if it’s allowed to grow out.  He’s also turning thirty.  And he’s very much alone with no relationship in sight.

Until he meets Vince Taylor.

Vince is the epitome of visible perfection.  He’s gorgeous.  He has the body of a jock and every gay man around wants him.  He is everything that Paul most definitely is not.  He’s sexy.  He’s confident.   So imagine Paul’s surprise when the gorgeous Vince wants Paul.  Paul is convinced that it is a joke… a prank.  No one who looks like Vince would ever give someone like Paul a glance much less a full-on look.

So begins our story.  It’s Paul’s thirtieth birthday and he has just been embarrassed by Helena Handbasket by being called out publicly at the club where she performs.  He noticed Vince earlier but was convinced that Vince wasn’t really looking at him hiding upstairs away from the club goers.  Vince was looking at Paul and he will stop at nothing to get his attention.  Vince has the looks but he’s not very bright.  But he knows he wants Paul and is convinced that he can make Paul see that he is good enough for a man like him.  A accident between an bicycle and a car door helps in Vince’s quest.

This was a very entertaining read.  It has the classic Klune humor as well as serious moments throughout.  Paul’s family is hilarious.  Vince’s? Not so much.  Sandy/Helena is the ultimate best friend.  The homophobic parrot was priceless.  I fell in love with almost all of the secondary characters.  Paul has a funny inner monologue that reminded me of Bear.  While I found it to be funny most of the time, I also found it to be a bit tiring at times.  That, however, did not take away my love for the story as a whole.  I started laughing on the first page and continued to do so throughout almost the entire book.  The antics of Wheels and Johnny Depp only added to this.  I found myself shaking my head a few times.  Parts are not exactly P.C. which made it even that much better.  There are a couple of times where I was not too pleased with Vince but once the reasoning for his behavior came out, I understood and got over it.

Something happens toward the end that I (unlike some other readers) found to be perfect.  I knew it was b.s. a couple of pages in.  This is TJ Klune, remember?  You can’t read one of his books without a surprise or two thrown in.  I admit to a quick “What the hell?” moment but then I remembered that he would not do that to his loyal readers (Burn doesn’t count… if you read it, you know why).  In the end, I laughed it off… as I was meant to.

This is a book about love-at-first-sight.  Not realistic, I know, but somehow it works in this book.  It is also the ultimate opposites-attract story.

Overall, another excellent read by TJ Klune.  I will continue to stalk his Facebook page and blog and pre-order his next… and his others after that.  I will always be a fan, even if I now have Jenny from the Block by Jennifer Lopez stuck in my head (that’s not a good thing). 🙂  I love how the door was left open for Sandy’s story.  Without giving a spoiler, I can’t say more than that.  I look forward to that one as well as any others this author has to offer.