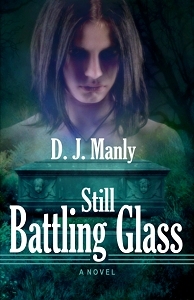 Still Battling Glass picks up where Battling Glass left off. Half human/half vampire Emilien has been living with his human lover, Carl, since they survived a battle with Emilien’s power hungry, spiteful father, Alexander.

Emilien and Carl have now been together for 30 years. Carl is 57 and increasingly maudlin over his   mortality. Carl is aging and generally not in peak health, whilst Emilien stays permanently locked-in to his immortal age of approximately 25. It’s also hard for Carl to endure people commenting on his attractive “son” when Emilien is his lover. Emilien being Emilien believes it’s best to let Carl be on his own, to move on without him, because he’s taken enough happiness from Carl already. At this point I was ready to jump into my Kindle and slap Emilien and say “communicate; you don’t leave your depressed partner, it’s not cool, Emilien.” However, Emilien is nothing if not constant in his model of behaviour – perplexing and, at critical moments, uncommunicative, yet, paradoxically, kind and supportive of those who he sometimes knows the least about eg Stoner and Mickey, two down on their luck characters; Stoner, a petty thief and Mickey a 14 year old from a troubled home. Don’t get me wrong, Emilien does care about those he knows/loves but he sometimes struggles to truly empathise or see the big picture.

Alexander is back, again. He’s over his truce with his son, Emilien, and wants to exact revenge. Alexander does not want Emilien rallying the “vampire nation” behind him. Ironically Emilien has never wanted to lead anyone. At heart he’s always tried to keep a low profile and fit into his human side, not be a leader of vampires –

“You are a God,” Bradock whispered. There was a reverence in his voice, “You are a gift to us all.”
“It seems to be my fate,” Emilien said, trying to keep the bitterness out of his voice. “I am destined either to be exalted, or to be deemed worthy of death. It’s ironic really, since all I’ve ever wanted to be is an ordinary man.”

Alexander has summoned dark forces to battle Emilien, and those on his son’s side, this time around. Alexander is using fellow crony/council member, Wolfgang, and a new dark presence, Neil, to find Emilien, who, because he’s hurting after leaving Carl, has resumed a pattern of previous self-destructive behaviour – drugs and random sex.

Along with Emilien and Carl everyone left from book #1, Battling Glass, is back – Nathan, Vanessa, Harmony makes an appearance. And Francois, ahh, Francois… and some newcomers including, Mickey, Stoner, Bradock, Neil, and a few helpful humans. There are also other vampires in the background with their own agenda, all regarding Emilien.

I really have enjoyed this series. It’s interesting, as in Battling Glass I did not have much love for Carl and I still loved the book. Here, in book 2, I empathised with him immensely. I felt more connected to him, his personality was more fleshed out, albeit in a sadder context. He has had it tough, he can’t let anyone know what Emilien is; he can’t work or connect with others in order to continue being in a relationship with Emilien. They have also needed to keep on the down-low from Alexander. For love, Carl has given up much, and now he is older he’s struggling to face his aging appearance against a young, gorgeous partner. He thinks about his mortality versus his partner’s immortality. Carl also knows that Emilien has had needs that only Francois has been able to fulfil, so he has had to share him over their 30 year relationship; which hasn’t been easy. So my appreciation of Carl’s character grew very much in book 2.

Francois proves himself to be a loyal friend, lover and ally, yet again, and my love of Francois continues in book 2. Francois does a lot of the hard work in helping a rather helpless Emilien when he needs it, including protection of Mickey, whom Emilien has taken under his wing. Nathan is as charmingly socially aware as before *sigh :(* and, I personally love Vanessa, have a huge crush on her, she’s witty and tough, yet it’s balanced with a conservative compassion, DJ Manly has written her words so well, she has some of the best lines in both books. Vanessa is just as much the survivor here as she was in book 1–

“Whose lapdog are you now?” “No-one’s!” She met his gaze. “I like winners, you know that. Are you on the winning side, Alex, or losing?”

Both Battling Glass and Still Battling Glass look at humanity, what it means, what form it comes in. Both books also look at what/who constitutes family and love. The main characters are gay, however there is much sexual fluidity within all the characters, which I like, they’re vampires after all, or, at times, fringe dwellers. I love D J Manly’s take on paranormal, it’s dark, there is some interesting, yet easy to digest world building carried on, great characters and, where book 1 contained historical elements, Still Battling Glass is primarily contemporary with a quasi-gothic feel. There was also a much stronger erotic current this time around as well. This book wrapped-up any questions one might have had from book 1. Although it finishes the book off nicely, the epilogue leaves some possibilities to move on if the author so chooses. I hope so. Terrific reading.