Sins of the Father (Angel and the Assassin #3), Fyn Alexander 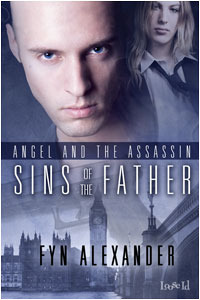 Kael and Angel’s relationship continues in the third installment of the Angel and the Assassin series.

Angel and Kael have come a long way since Angel witnessed Kael killing his stepfather 15 months earlier.  They have fallen into an odd type of domesticity…  or as domestic as Kael can be  with his dominant ways.

There is really not a whole lot to say about this book as not a whole lot happens really. Don’t get me wrong, the book was good but the action was minimalized compared to the others in the series.  There is a reappearance in Kael’s mother’s life of an old boyfriend who had had a sexual relationship with a very young Kael many years earlier.  This man gets caught up in a jam and expects Kael to (literally) bail him out. Also, Kael is given the assignment of guarding a very important political figure from Russia.  There is more to this man than Kael realizes and it takes a long time to figure out who the man really is.  I have to say that I had that one figured out almost instantly and it was confirmed much later in the book.  When the two men meet, something happens.  It didn’t go there or I would have stopped reading on the spot as I do not tolerate that in the books I read.  Without giving a spoiler, I can’t say why it was so disturbing.  Those who have read this will know exactly what I am referring to.  I was not pleased with the way all of that played out (with the Russian).  What I expected Kael to do, he didn’t.  I was surprised by that and a little frustrated even if it was the right thing at the time.

Kael has fallen back into some of his firm ways when it comes to Angel.  He’s not the total bastard that he is in the first book of this series but his behavior does revert back some.  Not only is he controlling when it comes to Angel, he doesn’t allow Angel to make any decisions on his own.  At all.  He takes his role of Daddy very seriously and that involves not allowing Angel to make any decisions on his own and if Angel voices his displeasure of this, Kael punishes him.  As with all normal teenagers, Angel rebels.  Not much but enough to put himself in bad, and sometimes dangerous, situations.  Angel is not quite as naive in this book as he is in the others but his youth still shows.  He is being forced to grow up quickly and is not allowed to do typical teenage-boy-things.  Thankfully, Kael catches on and steps back a bit.  Not much but a bit.  At one point… and only in one place in the book… Kael loses his temper and lashes out at Angel in anger.  While what he did was never repeated, it is something that should be noted.

Overall, this was a good book.  Better than the first in the series but not quite as good (in my opinion) as the second.  This ended with more things left undone so I am assuming that the series does not end here.  There are things that still need to happen (mainly Angel’s college and training with the organization that Kael works for) so I will look forward to the next in the series to see where the men go from here.

Also, I have to say that the blurb for this book on Goodreads is a little misleading.  What it states does happen but not in the sense of which it is described.