Sideways Down the Sky by Barry Brennessel 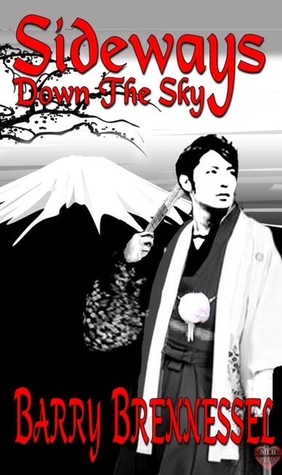 In the land of snow monsters and steam baths, complex characters as diverse as the Japanese terrain experience lust, loss, and love.

A young boy performs a daring rescue. A woman loses her old life to face an uncertain new one. A teenager suffers through a cataclysmic event. Unusual bonds form at the Tokyo Olympics. A rent boy’s hardened heart melts when he meets a sexy, buoyant stranger.

Much like the Japanese islands themselves, there is commonality to be found among myriad differences. The poet, the musician, the artist, the tortured mother, the bankrupt father, the protective brother—they all know that there’s a new day awaiting them after the moon slips sideways down the sky.

Sideways Down the Sky contains twenty five short stories that are also chapters and are masterfully interconnected. The book has a solemn tone and a number of the chapters/stories are deeply moving, particularly those involving Hifumi and Eiji, Akio and Kazuki, Genkei and Akio, Miyake Toru/Sasaka Yuji and Akio. And all of the journal entries that are on page are sublime and made my heart ache.

I honestly cannot review this book in it’s entirety because it would take too long, and it’s too hard to adequately reflect on little nuances that refer back to the sky, the snow monsters/gods, and the build from approximately 1915 through to current day Japan; not to mention the interesting, kind, complex characters and their journeys. The juxtaposition of youthful innocence against a darkness – whether that be a mother forced to kill her own children and a young son, hurt to the core, who tries his best to stop it. The love he has for his ‘brother.’ Or whether that be a nuclear bomb that destroys not only a city, but people’s lives, but true love.

No matter what the story, or connection, Sideways Down the Sky is thought provoking and meaningful. I think it is utterly beautiful. Stories that are so well written and knitted together to form one book. The characters, their stories, are cleverly interlinked, like the long-lasting love of one Japanese boy who fell in love at fourteen in a difficult time and place.

“You stare at me.”
It happened then. Just happened. Like seeing something soft, plush, and wanting to reach out and feel it. Like silk. He reached up, and stroked Genkei’s cheek.
He grew nervous of the reaction. He didn’t expect Genkei to close his eyes and sigh softly.

From the innocence and joy of love, to the pain Akio endured 3.5kms from Ground 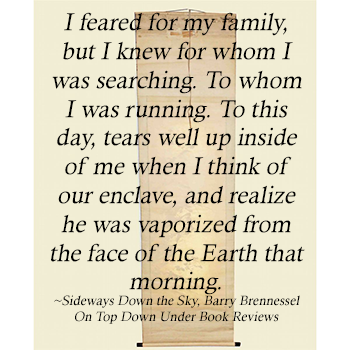 Zero in Nagasaki. 3.5kms from the enclave where he met his soul-mate, and through unforseen circumstances wasn’t there when the bomb hit. He always remembered Genkei and that terrible loss, the picture Akio – the budding artist – drew in their enclave, the journal that he kept.

It touches so many things that I’m interested in – different cultures, (in)humanity, enduring love and the bombing of Hiroshima and Nagasaki. I am a fair age, my father fought the Japanese in WWII, he came home. My grandfather didn’t. I have always believed the bombings of those two cities to be barbaric. I fought with my own family about it, I was a heretic for thinking as I did, for speaking up. Then I read this –

She got into a fistfight with Trey years ago. When they were well into adulthood no less. He accused her of calling the bombs unnecessary. He pointed out all the shit that Japanese did to people. 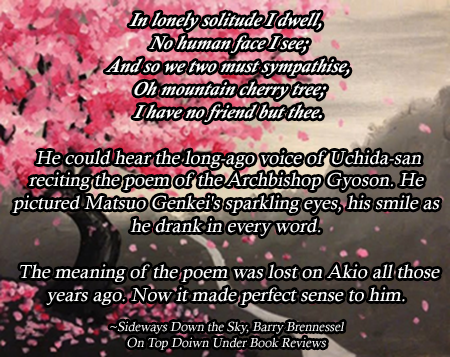 Matsuo Genkei, although just thinking of them now, two days after finishing, they evoke so much emotion in me. There’s also two Japanese rent boys – Sasaka Yuji and Miyake Toru – who are integral to the book, and an important… ‘project’ for Akio. Plus the other incredibly interesting characters before and during their stories, like Ishida Kazuki who faced his own loss and pain in the battle to secure the Hunan-Guizhou-Guanxi railroad in China during the War. Whose path crosses Akio.

“Will you hold me until sunrise?” Kazuki asked.
“I will hold you for as long as it takes,” Akio said.
And neither of them knew if it meant days, weeks, years. But Akio took comfort in knowing that this night, this very night, the cherry tree lost some of its stature.

This book also links characters and short stories to Reunion, which I have read and am now rereading.

Sideways Down the Sky is not standard MM fare – just putting that out there. I’m not saying it isn’t romantic, because it is, but I struggle with a romance label for the book, as that is too simplistic. The love underpinning the book is more realistic and raw. Like life, it is sad, hopeful, and deals with other events, the writing incredibly empathetic and very much rooted in history and fact. It’s also about connections in their varied forms and what that means to the individual. The writing is quality through-and-through, and it is relevant no matter the time period it is set in. It does subtly look at being a same-sex attracted male when there was no “gay” or LGBT community.

Soft whispers, the musky scent, the diminishing space between them, and a mutual understanding that was somehow borne from the omission of words.
A hand on his thigh.
It was a test, Kazuki knew. A man who finds another man’s hand in such circumstance will either flinch, or tense with excitement.
“What were your thoughts while I swam in the river? In my nakedness?”
Kazuki took hold of Orochi’s wrist and guided his hand.

This is another wonderful book by Barry Brennessel; Paradise at Main & Elm was my Book of the Year in 2013. Sideways Down the Sky now joins it on my list of all-time favourites, and while Adrian and Ezra hold a special place in my heart, so do several of the characters in this book. I loved Akio and his enduring love for Genkei. I 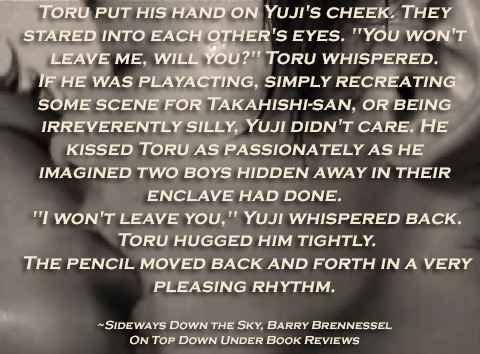 thought it was fitting he ran into Kazuki, their understanding of pain and the special relationship that was forged from that. Then there are Yuji and Toru, two rent boys who Akio sees so much hope for, a project that gave him so much – an ‘ending and a beginning’. Sideways Down the Sky is well named and evocative; it resonated with me, and if you like Barry Brennessel or the sound of the book, I cannot recommend it highly enough. 5 Stars!

I remember talking to you behind the scenes while you were reading this and you were worried about doing the book justice in your review. I haven’t read the book, but I can tell that you definitely did. Outstanding review for what I can tell is an outstanding book. The first quote broke my heart.

Oh, I have to say it breaks my heart too, Cindi.

Thank you – you always get the behind the scenes arghs and eeks! – not an easy book to review and it is an outstanding read.