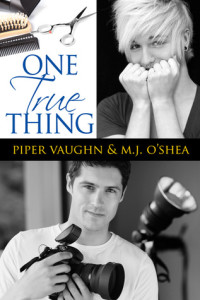 Good continuation of the One Thing series.  Dusty finally gets his HEA.

I never start my reviews by listing the official blurb of a book but I feel that it is necessary in this case for reasons that I will state farther into my review. There are very slight spoilers.  Take note of that before reading.

Dustin Davis spent years wishing for a prince but kissing frog after slimy frog. When he sees Archer Kyriakides for the first time, Dusty thinks his luck has finally changed.  Archer could be it.   The One.  But their hot and cold romance leaves Dusty confused:  why does it feel right one moment and wrong the next?  It doesn’t make sense — until the day Dusty meets Archer’s identical twin, Asher, and realizes he’s been seeing them both.

Asher Kyriakides dreams of being a fashion photographer, but he’s stuck with a job he hates and an irresponsible playboy brother whose habits drive him absolutely insane, especially when he finds out Archer is dating the cute little blond Asher can’t seem to forget.  Torn between loyalty and desire, Asher does nothing but try to warn Dusty away.

But when Archer finally goes too far, Dusty turns to Asher for support, and Asher knows he can’t refuse.  It isn’t long before they realize they’re falling fast, but more than one thing stands in their way, not the least of which is Archer, who isn’t quite ready to stop being a thorn in his brother’s side.

I am a huge fan of this series and I admit right off that I am a total fangirl for the main character in One True Thing, Dusty Davis.  I fell in love with him as a secondary character in One Small Thing and have eagerly awaited the sequel where Dusty would finally get his much sought after happily-ever-after.  I have (to date) read close to 500 books or short stories in the M/M genre and Dusty ranks up there as one of my all-time favorite characters, main or otherwise.  As much as I loved Rue and Erik in One Small Thing (the main characters), it was Dusty who stood out for me.  I have compared other characters (from different books and authors) to him.  I felt the need to share that before going any further with my opinion of this specific book.

First off, I have to say that the blurb is misleading in regards to Dusty ‘seeing’ Archer and Asher at the same time. He isn’t seeing both at the same time, not in the way the blurb implies.  As much as I was looking forward to this book I was hesitant to read it as well because of the implications (I’m paraphrasing):   Dusty is inadvertently dating identical twins… one hot, one cold… and he suddenly one day finds out that the man he is dating is actually two different guys.

Okay, that’s wrong.  Completely wrong.  Dusty literally bumps into Asher on the street one day.  Somehow, someway, he just knows that Asher is the The One, even if Dusty never says a word and the ‘meeting’ is over in seconds.  Weeks later, Dusty is still thinking of the one who got away.  Miles away Asher is feeling the same way in regards to Dusty.  Weeks go by and Dusty sees ARCHER in a coffee shop and he is convinced that Archer is the man he stumbled into all those weeks before.  The man who has invaded his thoughts since that quick moment on the street.   At no point in the story is Dusty seeing or dating Archer and Asher at the same time.  There are a few instances where Asher and Dusty SEE each other in public but they do not have any kind of relationship, nor do they even speak to each other, until much later. Dusty thinks he’s Archer during those times.

Archer is a bastard, to put it mildly.  A user, a druggie, a man whore, a deadbeat who refuses to keep a job and all he does is have one-night-stands and parties all the time…. and he uses the hell out of and takes advantage of his twin…. constantly.   Asher, his identical twin, is the complete opposite of Archer.  He’s a hard working photographer who doesn’t sleep around, he’s responsible and all he wants is a man who he can share his life with.

Dusty starts (kind of) dating Archer even knowing that the spark that he felt initially is not there. Not willing to give up, he keeps going (even if he refuses to have sex with Archer… which causes major issues between the two) hoping to find that spark that he KNOWS he felt when he literally stumbled on him months before.  After a rather embarrassing incident, Dusty discovers that Archer is an identical twin when he comes face to face with Asher. The spark is there and Dusty realizes during that moment that the man he has been dating is not the man he thought he was.  Later, Archer leaves Dusty in a very compromising position and Dusty immediately calls Asher for help.  Thus the beginning of their relationship is born, even if Archer is still there in the background…. being the absolute total bastard that he is.

This story was going along perfectly.  Asher and Dusty were perfect together in every way. They were quickly moving toward their HEA regardless of Archer and his issues.  Until around the 80% mark on my Kindle Fire this was a 5-star read for me.  Then Archer did something to Asher that was unforgivable and instead of doing the right thing to rectify it, Asher went in a different direction.  He was willing to almost give up Dusty, the love of his life, by making a choice to almost do something that would destroy the relationship completely.  That bugged me. While reading this particular part of the book I was thinking that there was only one way to fix what Archer had done and surely Asher would do it.  Instead, he took the problems on himself instead of making Archer responsible for his actions and it almost destroyed him and Dusty in the process.  The way I saw it, Asher was going to lose the relationship with his brother either way so why not make Archer responsible for his own actions for the first time in his life?  It did not happen that way and I was not pleased with how that played out.

Overall, the book was very good with the exception of the issues mentioned above.  Rue, Erik and Alice from One Small Thing are in this quite a bit and that made me happy as I love them all.  Dusty is, and will forever be, one of my all-time favorite m/m characters.  The fact that the authors were able to use the actual photo on the cover that inspired them to write about Dusty made it that much better.  (For those who don’t already know, the blonde on the cover is the popular gay porn star, Austin Mitchell, and this particular photo was used with permission for the cover).

Archer is the perfect bastard.  I have read comments recently where a couple of readers were asking if Archer will ever have his own story someday.  I personally do not wish to read anymore about this particular character.  In my eyes, there would be no redemption for him no matter how the authors portrayed him.  I do, however, want to see more about Dusty and Asher.  There are a few things that I felt could have been elaborated on and I would love to see how those are resolved.  The Archer/Asher names were confusing in the beginning.  The POV’s alternate in the book between Dusty and Asher so that helped to lessen the confusion on that front.

I really enjoyed this even if I did find myself shaking my head a few times.  I look forward to reading the next in the series, about two secondary characters mentioned slightly in this one (Lane and Josh).

This is book two in the One Thing series.