One Night Ever After (Anthology), Various Authors 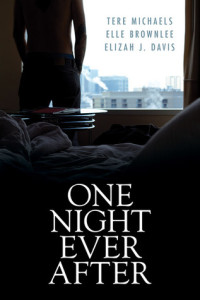 A nice collection of three stories where the characters all meet as a result of a one-night stand. Each couple ends up wanting, and getting, more.

Just  A Drive by Tere Michaels

Wyatt and Benji are coworkers in the music industry. Benji is shy. Wyatt is “one night Wyatt” who has a reputation for hooking up and getting gone. The first time he sees Benji at a company party he knows he will have him in his bed – but only for a night. Eventually they do get their ‘one night’ but as Wyatt tries to sneak out while Benji is asleep, he gets a panicked call from his very pregnant best friend Raven.

Wyatt has to get to Pennsylvania and he needs to do it now. There is an emergency with Raven and he doesn’t hesitate to tell her he will be on the road soon. The problem? Wyatt is in New York. He has no car, no license and no idea how he will get several hours away to Pennsylvania to help his friend. Benji comes to the rescue and offers to drive him there. Surprised (Wyatt was about to sneak out on the guy after all), he accepts because he has to get to Raven and he has no other options. The trip is interesting (in more ways than one) but Wyatt is still insistent on not getting involved in a relationship. Sure, he and Benji have sex a few times but he makes it very clear that it will not go beyond the bedroom and maybe a friendship. Wyatt is very adamant about the ‘no relationship thing’ and this comes to a head later. Saying anymore than that would be too telling.

There is an interesting set of secondary characters from Raven to her husband and to Benji’s parents, though they aren’t in the story much. I adored Benji from the very first page and continued to until the end of the story. I had a few issues with Wyatt but they disappeared for the most part as the story played out.  There is quite a bit of humor that added to the story. Overall, a very entertaining read.

Just A Stranger by Elle Brownlee

Michael and Andrew meet in a loud club. Neither man is into the club scene but their intentions that night are for one thing only: a one-night stand with no strings.  Andrew is in town for a convention and Michael is a local. Andrew is also very secretive. He shares nothing other than what he wants in bed. After a night of hot sex, Andrew disappears without a word while Michael sleeps, leaving a stunned Michael who was convinced that there had been a connection between the two men. Fast forward a few months with zero contact (no personal details had been exchanged before Andrew bailed) and Michael is back living in his small hometown of Starling, Indiana, as a result of a family emergency. Imagine his surprise when he accidentally bumps into the man he has been unable to stop thinking about since their one and only night together.

Andrew has trust issues that stem from his childhood.  Leaving Michael after their night together hurt him but he had to move on. He has responsibilities that are much more important than some man he met in a club and had sex with, even if that man has been stuck in his thoughts ever since.

The reunion of Andrew and Michael does not go well. Michael makes assumptions that are as far from the truth as they can get. With Starling being a small town, there is zero chance that the two will not see each other again. This fact works in Michael’s favor and he does everything in his power to make amends for his initial assumptions.

The story takes place over a period of months so Michael and Andrew have a chance to get to know each other as friends before moving on to something else. I enjoyed the slow pace of the relationship but I did have a problem with the skipping forward so often. While I understand it considering the length, I would have liked to have seen more during those weeks and months that are glossed over. There is a nice set of secondary characters and I enjoyed every one. There’s Michael’s large family that the reader will fall in love with. There are Chloe and Tanner, two children in Andrew’s care (I won’t give away why they are in his care),  that are absolutely adorable. Each is written perfectly for their age (around 7 and 3).

Overall, a very nice story. Michael must break through the barrier that Andrew has over his heart. It takes a lot for him to do manage it but in the end he does.  There is a small bit of drama but it is resolved quickly. Everything comes together nicely in the end.

James is kind of a homebody. He doesn’t do the bar scene and somehow he always ends up hooking up with a bad ex, calling his best friend Kara the next day in shame. One night Kara’s boyfriend is out with his friends so she talks James into going out to a gay bar. Instead of being interested in all the twinks showing him attention, he sits alone, bored out of his mind. In the meantime, Kara has been getting to know a man at the bar.  That man being Devin, who had been abandoned by his own friend.  When the ex shows up at James’ table, Kara talks Devin into rescuing James from the night of shame that she knows is about to happen. This is where the story begins.

James is surprised when a very good looking Devin comes to his table and pretends to be his date. Deciding to go with it, they make their way outside and end up back at James’ apartment. A night of sex ends up turning into them being snowbound throughout the next day – a day that both men hope will be spent in bed. Unfortunately, there is a  emergency with James’ sister-in-law and he is forced (without warning or notice) to babysit her children (who are 5 and 1) while she deals with a sick husband.

The day is spent between watching My Little Pony and building forts. This leads to the children spending the night and the “adult games” that had been planned between James and Devin never come to fruition and Devin ends up going on his way the next morning.

I can’t really say more without giving it away so I’ll stop there. The story was nice and I really liked both of the main characters. As I am a sucker for children in books, I enjoyed the kids as well. I did not, however, enjoy the sister-in-law and her assumptions that it would be okay to just drop her children off without warning and not really showing much concern when she realized that she had ruined plans for her brother-in-law. But then again, the story would not have worked otherwise.  Overall, an enjoyable read.

This is a  nice collection of stories. Each was fun to read as they all have a bit of humor infused into them. With each relationship starting as a result of a one-night stand, they all end with a HFN ending but with a promise of a HEA. I would love to see all of these guys revisited someday to see where they are farther down the road.  I normally rate each story of an anthology separately and this one is no different. Each story gets 4 stars from me. A very entertaining read.

This sounds like a nice read and with kids in it a Cindi read 🙂 Terrific review, Cindi 🙂

Thank you! It was definitely a Cindi read with the kids. They were adorable and written very well. I enjoyed all three stories.