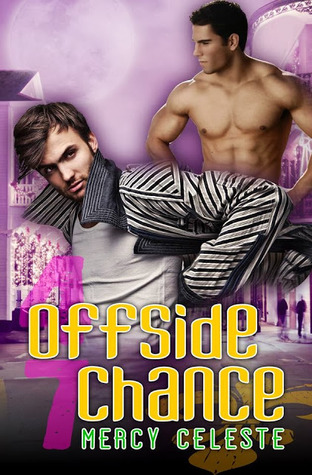 Purchase At: ARe, amazon.com

William “Slayer” Slater is Levi Brody’s (Sidelined) good friend, they went to college together and they played football together. Slayer is still in New Orleans and still playing football. His house has recently burned down and he is staying at Levi’s townhouse while he gets it sorted out. Levi is back in Alabama with his partner Tracy, so it’s no problem letting a friend stay there. Jude, Levi’s brother, is a lawyer and ordinarily he lives in Alabama, but he is inbound to New Orleans to be studying further and volunteering at a legal clinic. Of course, he is going to be staying at Levi’s townhouse as well. Thing is, Levi hasn’t bothered telling either man that the other will be staying there, so when Jude turns up it is a less than auspicious start. Jude ends up with a gun in his face courtesy of Slayer.

Once they get past the rocky gun-in-face start, Will and Jude are like the Odd Couple. Jude is clean and cooks, he listens to classical music and he is studious and reserved. Will is messy and hires women to clean who also  fuck him. Jude knows this because whoever the cleaner is they are very noisy in bed…on multiple occasions.

Jude is having a hard time coming to terms with Levi’s alter-ego, Livy. And that is what it is, an alter-ego, it is not a psychiatric disorder. Same as Will, he was just as shocked. Obviously Jude has known Levi most of his life and didn’t know about Livy until Tracy came along and things exploded, or is that glitter bombed? Will has known Levi for sixteen years, same thing for him. He did not know “Livy.” These days neither knows what they’ll get when they speak to him – Levi or Livy. Levi’s room at the townhouse is now being occupied by Jude and it’s interesting – pink  patterned femme sheets, feather boas, makeup. Very Livy, not so much Levi.

Levi is often stirring Jude up about anything he can. But when Jude complains about the annoying William to Levi, he gets more lip from Livy –

“Of course, there could be other things going on if you’re arguing on the phone like a couple of teenagers.”

“Fuck you, Leviticus.” Jude ran a hand through his hair…

“That’s what I’m talking about. Maybe you and Slayer have come to some sort of mutual -“

Rather apropos words from Levi / Livy given this is a GFY/OFY book. But, hey, Jude and William are both straight, right? It seems to be the only thing they have in common, although Jude is 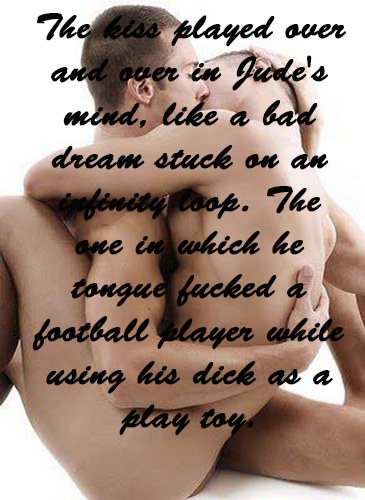 Anyway, you get both MCs POV which was good because William was not an easy character to like initially. If I wasn’t aware of what he was thinking, which contradicted his mouth, I may have thrown something, like my Kindle.

There are a number of story arcs going on, including Levi trying to forge a closer relationship with his brother, and Jude not sure why that’s the case. They have never hated each other, they were once close, but a dysfunctional family, time and circumstance have created a rift. Here, they close that rift considerably. For those readers who had an issue with the “cheating” aspect of Bo and Dylan’s relationship, maybe this book will clear it up for you. All of the relationships are explored a bit more in Offside Chance and Levi gets quite a bit of love from the author and quite a bit of page time. There are flaws in all their relationships, it’s called life, but they all care for one another – Bo, Dylan, Levi, Tracy, Jude and William. They all support one another and form their own family, of sorts. And they each love their own partner. William discovers, as does Jude, that they have more in common than they would like to admit, that is well developed. They also discover that the rest of their differences fall into an opposites attract realm.

That in spite of the fact that I rarely like GFY / OFY books, I liked Offside Chance – and this is a double whammy with both characters declaring how “not gay” they are. I honestly wasn’t sure going in. If it wasn’t written by Mercy Celeste I may have not read it. I’m awfully glad I did.

I liked the build of the characters. I started out not liking William but I grew to like him quite a lot by the end, and I truly enjoyed Jude and Will’s relationship.

The snark was very good in the dialogue. These guys bounced off each other in a pretty sarcastic and witty way.

I really liked Jude. I thought he was a nice guy, sensitive, smart and caring. He also held his own amongst the “knuckle- draggers”.

The sex. It was inventive, smokin’ and face melting, cigarette smoking inducing, even for someone who doesn’t smoke. It was kinky in parts, Will seeing Levi ride Tracy was all kinds of sexy.  There were some interesting voyeuristic touches, here and there. The bathroom sex scene between Will and Jude – awesome. All around it was just plain H.O.T.

I enjoyed seeing Levi and Tracy. Bo and Dylan. I enjoyed the interconnecting of their relationships. Seeing a bit more about their struggles and their happiness.

If I read the word fag, or derivation of the word, one more time I would have screamed, I understand William is straight and a football player and dealing with his own feelings and protests too much, but it got to the point of pissing me off.

The book needed some tighter editing.

I HATE this cover with a passion.

This was a really good addition to the series, but I must know more now. There are definitely more things to be addressed. There was a story arc left up in the air. However, the good news is, there will be a fourth book and that will definitely cover issues that need addressing, and that should be mighty interesting. I ended up really liking Jude and Will as a couple and I really would like more about them. I think they deserve more book time.

If you like Mercy Celeste, if you like this series, if you like smoking hot MM sex, and some passionate characters, then Offside Chance could be for you. This book is not a heavy read. Mercy Celeste does not go off into angst-y territory. It is sexy, there are strong characters, interesting story arcs and it is a GFY /OFY that works really well.

Review copy supplied by author in return for an honest review.

I know how much you love this series and this looks like a good continuation of it. I’m not a fan (at all) of GFY story lines but it looks like it may have worked here. Great review, as always.

Yeah, I am not a fan either, can you tell? I honestly wasn’t sure how I would take to this book. Mercy Celeste did a very good job of making it credible, entertaining and sexy. It was worth all of the 4.5 stars.

Nice quote in the picture. This sounds hot. I liked Six Ways. I have to kind of agree I don’t think a look of that cover. None of them have been great. Thanks for the review, kazza. 😉

The quote is all Mercy’s, Jana. But I will take credit for putting it in the picture. Go, me!

This book is hot and I really recommend it, but I would read Sidelined first because Levi from that is in this quite a bit. Did you read Sidelined?

Thanks, and enjoy it!