No Angel, Daniel A Kaine 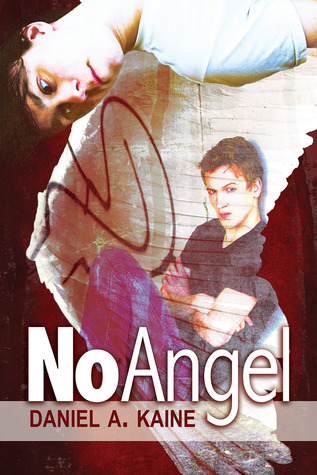 ** Could Be Considered To Contain Some Spoilers**

Josh Harper has just had his eighteenth birthday and his aunt and uncle believe they have fulfilled his mother’s request to take care of him. They throw him out of their home, the only home he has known since his mother died of cancer several years ago. Josh is not street- wise and on his first night out on the streets he is set upon by two homeless men. He is saved by someone who seems to have angel’s wings and strength. He has taken a bit of a beating before being saved, he must have, angel wings seems somewhat strange. His rescuer takes Josh with him to “his house” with the rest of his brood and he discovers that Sam does have wings which pop out from his back.

From here the story picks up with Josh trying to fit into his new life on the streets…technically living in an abandoned house with other homeless kids. Josh is in for a shock when he discovers that they steal from shops in order to survive, they have no money and they need to eat. He is also upset because he hears that two homeless men were taken to hospital. He quickly learns/works out it is the same two men who attacked him, so he is concerned about the fact that Sam would do that. Josh is a bit of a boy scout, he is new to the mean streets…fair enough.  Sam is a bit of an angry ant. He and the three younger children in his ‘care’ do what they have to in order to survive. Josh and Sam also fight a bit because of their different beliefs, but a friendship develops between the boys who are the same age and both with Devil’s Syndrome.  However, the book does look at them having more than a friendship.

Things that didn’t work for me –

I can’t say I particularly got into any of the characters. No one was fully developed enough for me to really care about them. Given the topic at hand, children living on the street, I should have been able to feel it and been emotional over it, and I just wasn’t. Sam was angry a lot of the time – I’m not sure how many times “clenched fists” appeared in the text but it was a fair bit. Josh was just so naïve which I often find endearing, but in Josh’s case it came across as insipid. Lots of “head hanging.”

For a paranormal/fantasy the world building was pretty well non-existent. There are glimpses only. Sam had wings and some strength, Josh had a force-field that was never developed, Becca had powers of invisibility, Robbie used spirit to help him draw things that could happen in the future and James I cannot actually remember. None of these were really explored, other than you know they have these abilities. The most explored was Becca who used her invisibility more than a few times. So it relied on telling rather than developing theses aspects. We are told via Sam (in particular) about the negative reactions and the outright dislike or hatred of theses kids by humans. But the why wasn’t fully and clearly developed. I get society often doesn’t look kindly on differences, but Sam has his horns removed (they aren’t huge for the record.) If it is part of having Devil’s Syndrome,  why is that? Why do humans sense the difference and have this really visceral reaction and intense dislike of these kids?

The book was just so negative. It seemed there was one bad thing after another. From Josh being thrown out of home, beaten up by the homeless men, to Josh being bullied at College, to Sam’s anger at humans and his tales of living on garbage when he had no food. To the occasion some random guys became angry and physical because the kids were using a basketball court, to people just glaring at them. To the event that occurred with James which, I might add, annoyed me and upset me as I felt it served no purpose other than as a means for a plot device for Sam to get even more angry.

I don’t know how Josh afforded to go to college with no money and living in an abandoned house with the others.

And what really bothered me was the fact that Sam was told his mother left when he was born because of his Devil’s Syndrome. That would be enough to upset a lot of people and give them a major chip on their shoulder, I understand that. The thing is, you learn near the end that his mother didn’t leave him. She and his father decided to protect Sam because she was carrying him with a risk at birth that she might die. His father had decided it was better to tell their son that his mother left. Let his son think it was because of him –

“Family? Don’t even try to pull that one with me. Family means nothing. Just look at Mom. She hated me so much she couldn’t get rid of me fast enough.”

“Perhaps it’s time I told you the truth about your mother.”

“The Truth? What the fuck are you talking about? Mom ran away as soon as I was born. You told me that yourself.”

No. No she didn’t. That did my head in. To tell a child that their mother left them is worse than telling the child that their mother died in labour. If your mother makes a decision to take you to full-term with risk, they do so because they love you enough to take that risk. None of the other children’s mother’s died so I’m not sure why the Devil’s Syndrome was any different for Sam’s mother. That a parent allowed their child to live with that feeling and under that illusion was not endearing.

No Angel is not listed or tagged as YA or NA on the blurb. Irrespective, this book is a YA, if you want to you could call it NA. Why do I say this? First of all, it definitely fits certain YA reading criteria –  ages, minimal, light, or, in this case, no sex – rather chaste kissing and hand holding – there is not much swearing, the MC’s are eighteen, there are three other children who range in age from approximately ten to thirteen/fourteen, and the story is definitely aimed at a younger demographic. I read and review for our LGBTQ YA sister site. I like YA. But I need to know that the book I am going into fits a certain criteria before I read it. I have different reading expectations. This did not meet my expectations of an adult book.

The concept was an interesting one – Devil’s Syndrome and the abilities that were there to be tapped into.

I like characters caring enough about others that they would help them.  I like people fighting for injustice.

The writing is nice and easy to read.

There was a happy ending.

No Angel didn’t work for me for the reasons already outlined. However, I can see others liking the overall concept and delivery, including  the fact that it is mostly a nice enough book to read, barring one event. Sam had his heart in the right place, looking after the younger children. It’s a kind of coming-of-age story, with two inexperienced leads who have no sexual contact, which may well suit a more romantic reader who also likes a HEA. It is a lighter fantasy/paranormal read – I know a few readers prefer a lighter fantasy/paranormal over a darker one.  I do prefer edgier or darker. If you like an LGBTQ YA/NA type of book then perhaps No Angel may appeal to you.

This book was supplied to me by the publisher, Dreamspinner Press, in return for an honest review

Great review. I can tell that what didn’t work for you definitely would not have worked for me either, unfortunately.

Thanks, Cindi. Not for me, but that happens. You can’t love them all 🙂