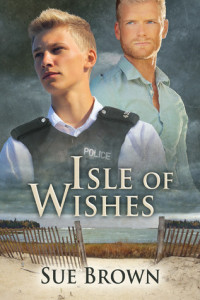 Sequel to The Isle of … Where?

Paul Owens is a British Metropolitan police officer. He’s a player and not ashamed of it. He’s openly bisexual and never has a problem hooking up with both men and women alike. He doesn’t do relationships and there is never a next time with one of his hook-ups. He has a reputation and has no qualms living up to it. He is who he is and doesn’t care what others think.

Paul didn’t bother to ask what rumors.  He’d heard them all, and they were all true, including the one about the chief super’s daughter and the chocolate sauce.

After a one-night-stand with yet another twink (that was hot!), he gets a visit from his older brother, Sam.  Sam is introduced in The Isle of … Where? where his own story is told…. his and that of his American lover, Liam. Liam has gone missing in the states and Sam is in a panic and needs Paul’s help. Isle of Wishes takes place three years after The Isle of… Where? and Sam and Liam are  close to finally being able to have their true happily-ever-after. Liam is in America to finalize everything so that he can finally, finally move to the UK to marry the man he loves. There has been zero contact for days and Sam is at his wits end, knowing in his heart that something horrible has happened to the man he loves. Paul doesn’t hesitate to help his brother. Flights are booked and within hours he and Sam are on a plane heading to the United States.

Olaf Skandik (Skandik) is a detective in a small town in Wisconsin. He’s gay but deeply in the closet and has no plans to ever come out of it. His family knows he is gay but it has been made clear that it is not acceptable and that it is never to be made public.  When he meets Paul and Sam Owens he knows he’s in trouble. There is instant attraction between him and Paul but he must take a step back. One, to help the distraught Sam find Liam.  Two, he knows he will never come out of the closet. His homophobic and unaccepting family and coworkers do not make that an option.  Three, the two men live a world away from each other.  But first he has to find Liam, who has disappeared without a trace.  With a little help from Paul (and against Skandik’s orders to stay out of the case) Liam is found. I can’t say much more than that without giving too much away.

Paul’s time in America is limited but this doesn’t stop him and Skandik from starting something anyway… something they have no hope of continuing beyond a holiday fling. But for the first time in Paul’s life, next time is an option. There is something about the other man that makes him want to take a chance. Unfortunately, he is forced to go back home after only a few short days. Thus begins a long distance relationship, though it’s much different from Liam and Sam’s before it.  Skandik not only has problems with the distance (on top of the ‘in the closet thing’), he also believes that because Paul is bisexual that he won’t ever want to settle down with a man someday.

“I think bisexuals fuck around until the right woman comes along, and then they conform and get married to breed like nice little heterosexuals should.”

They walked in silence, unable to carry on the conversation in public. Paul rolled his eyes at Skandik’s attitude but it wasn’t like he hadn’t tripped over it before.  He really didn’t give a monkeys.  He liked men, he liked women.  If straights or gays had a problem with it, it was their problem.  Paul got laid plenty.

The main thing I really liked about this book is that it is truly a sequel to The Isle of … Where? Don’t get me wrong, Paul and Skandik are the two main characters in this one but the rest of Liam and Sam’s story is told as well. This is not one of those books where the characters from the first book are only there in passing. Liam and Sam play an integral part in Paul and Skandik’s story, on top of having theirs continued as well.

The rest of the Owens family is there in all its glory. Everyone from Paul and Sam’s grandmother (Rose) to all the siblings and their wives or girlfriends. You can’t not love the Owens family, especially Rose. Rose is still as fiesty as ever and doesn’t think twice about butting into the lives of her grandchildren and that includes a very stubborn Paul.

“First time you haven’t brought home a skank. Keep this one.”

“… How the hell did you find a gentleman, Paul?”

You’ve got to love Gran Rose.

The sex between Paul and Skandik is hot. Their relationship, though different from most, is a nice one. Liam and Sam? You can’t help but love these guys. They have gone through a lot to get where they can finally be together and their love shines through brightly. There are other interesting secondary characters who make up the rest of the story.  Alex (Liam’s late best friend and the sole reason that Liam and Sam met) is in the story in a sense, as are his daughter and ex wife (the ex was not a likable person in the first book). Those parts alone had this reader teary quite a bit.

I loved revisiting with characters I grew to love in the previous book. I loved seeing Liam and Sam again after their own story ended with unanswered questions. I loved watching as playboy Paul finally discovered love for the first time in his life. There are a few teary moments and several “aww” ones. There are also parts that will make you smile.  The mystery of what happened to Liam in America is written well, though I wish more time would have been written about the resolution. Not much was said about it other than in passing. I would have liked to have seen how that particular situation played out in more detail. Also, I wish Paul and Skandik would have been together more in the book. They are given their time but I still wish there would have been more. As with the previous book, not all is settled completely so I hope there will be a book #3 in the near future.

Overall, an excellent sequel to The Isle of … Where? I really look forward to seeing where the author is going with the series. I can’t wait to see Paul and Skandik have the same happily-ever-after that Liam and Sam were finally able to find in this book.

Love the sound of this book/series. I have never read Sue Brown. But this sounds really interesting. I liked the hot-sex-start, he he. Great review!

Yes, the hot sex start with the young guy was pretty hot. 😀 This is a great book, as was the first one. I love how the MC’s from the first book were in it a lot and played a huge part in Olaf and Paul’s relationship. Highly recommended.

Sounds very interesting. I like Sue Brown. I read the first one.

It is very interesting. If you liked the first one then I think you’ll love this one as well. 🙂