Into The Woods, M.L. Rhodes 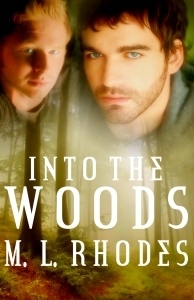 A very sweet love story between two men who were born to be enemies but instead find friendship and love.

Shaun McCarry ran away from his alcoholic father when he was only sixteen.  After years of being forced to go from place to place without warning, he had had enough.  The only contact with his father in the following years involved Shaun bailing him out of yet another jam.  On his 22nd birthday, Shaun has had enough and tells his father to never contact him again.  On the eve of his 30th birthday, Shaun receives a cryptic letter from his father advising him that he is in danger and to run.  There are no hints in the letter of what he is to run from or what kind of danger he is in.  Going by the return address on the letter, Shaun travels to the small town where his dad was living only to find out that his father had been killed three days earlier.  He shows up literally as the burial is taking place.  Shaun and a priest are the only people in attendance at the grave site and as the priest is doing his thing, Shaun looks up to see a man watching him from a distance away.  Somehow Shaun just knows that the man is looking directly at him, not just in the general area. After a very uncomfortable few moments with a judgmental priest who knows nothing about Shaun or what has kept him away from his father, he turns to leave only to come face-to-face with the stranger who had been watching him during the service.  There is a sense of déjà vu but before Shaun can figure out who the stranger is, he is hit with sudden pain in his stomach that almost cripples him.  The stranger seems kind and helps Shaun through the pain before disappearing.  Shaun eventually makes his way to the cabin in the woods where his father had lived before his death.  After a visit from the sheriff of the town, Shaun collapses inside the door of the cabin and is found there by the stranger from the cemetery.  This is when the story gets started.

The stranger is Rannon James who knows much more about Shaun and his history than Shaun knows himself.  He knows why Shaun is sick and what will happen if he doesn’t do specific things to survive.  Shaun eventually realizes why Rannon seems so familiar.  Rannon was Shaun’s first love 14 years earlier.  Shaun had been forced to leave town with his father without saying goodbye and has been searching for Rannon on and off since the night he was torn from the only person he would ever love.

This is a beautiful love story.  Confusing at times but beautiful.  Shaun and Rannon were best friends in their teens who eventually fell in love.. hard.  The 14 years in between have brought changes for both… which explains why Shaun did not recognize Rannon initially.  Unknowingly, Shaun is going through a physical change as a result of a long-ago curse placed on his family by Rannon’s ancestors.  This curse created two different species who hate each other.  Rannon’s people kill those like Shaun but Rannon refuses to kill.   He has been running from an abusive father and a family whose only goal is to kill those like Shaun and who see Rannon as a disgrace to the family heritage.  Shaun is ill because he is going through the change (created by the ancient curse) and is becoming a vampire who must have blood to survive.  Having never been told about this from his father, he is terrified of what is going on with his body.  Rannon helps him through the change as a stubborn Shaun fights him every step of the way.

Rannon’s people are shape-shifters and Rannon has been protecting Shaun from afar…. from Rannon’s own family.

Shaun and Rannon are a beautiful couple.  This has a friends-to-lovers theme and the-one-who got-away.  For fourteen years both men have wondered about the other and have never stopped loving each other.  When they finally reconnect, it’s magic.  They are both forced to endure danger, Shaun’s change and other obstacles to finally have their HEA.  The author does a good job with the relationship.  While there may be a bit of wondering what will happen and how it will happen between the two of them, you don’t have to read half the book before they finally admit their feelings for each other or act on them.  They had loved each other in the past and are now reclaiming that love.  The sex scenes are hot but not overly done.

The prologue/foreword tells the story of the curse that brings Shaun and Rannon together as supposed-enemies. While it was well written, I felt that parts of it were unnecessary as I was under the impression that the author was going one way but did not follow through.  I may have been reading much more into that so I do not consider it to be much of an issue.

The murder of Shaun’s father is explained as is the cryptic letter Shaun receives from him that warns that he is in danger.  You also find out why his father moved him from place to place often as Shaun was growing up.

There are a few secondary characters that kind of make up part of the story but this is mainly all about Shaun and Rannon.

Overall, an excellent love story between two friends who became lovers who were forced apart by circumstances beyond their control.  Years later they reconnect and find that the love they shared as teens has only grown stronger over the years and has become something more special as adults.  They were born to be sworn enemies but the love they feel for each other overcomes that and familial expectations.

I adored Shaun and Rannon and I felt their love to be written very well but I had a few issues with this book:

1.  Editing issues.  There are a lot of misspelled words with one being the very first word of the book:  Foreword is spelled incorrectly.  There are several misspellings throughout the book, including one that stands out in the author bio at the end.  I don’t normally read the author bio but this one stood out where there was no missing it.  I am normally able to overlook an error or two but this was not an inexpensive ebook so I feel that major editing should have been done before it was placed on Amazon (or any site) for purchase.  This did not take away from my love of the story in any way but it was something that I noticed instantly.

2.  There are quite a few things left undone and there are a lot of questions that are not answered.  I do not know if this is meant to be part of a series or if it is a stand-alone as I was unable to find out either way.

I recommend this for those looking for something different and who are looking for an amazing love story between two very different men. Unless a book is written by a favorite author, I tend to shy away from all things vampire/shifter related these days.  I am glad I took a chance on this one.  Otherwise I would have missed out on a very beautiful love story.