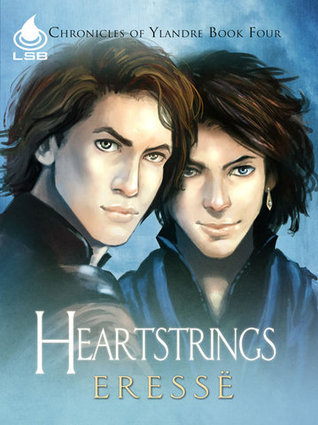 I love this series. Worth the wait. Eressë is a talented wordsmith and backs it up with another beautiful book.

The Chronicles of Ylandre is a tremendous series, beautifully descriptive with wonderful use of the English language in its prose. This series smacks of meticulous planning – every book from 1 – 4 spans approximately the same timeline, interweaving the previous books MC’s and occurrences with the current book’s MC’s as their own relationship unfolds. The world building that Eressë has previously constructed serves her well, as nothing of any great note is new here, just bits and pieces. There’s really no need, it’s all been gloriously built leading into Heartstrings, allowing for a complex story of love lost, love gained, lessons learned, friendships, and new shared and undying love.

Eiren Sarvan and Ashrian Mithani are cousins who have formed a relationship, been together for over 10 years and, even though Ren secretly craves more of a commitment from Ash, none is forthcoming. Ren is a hard working healer, often giving up his own time to look after the needs of patients suffering from any and all maladies; irrespective of title, or hour of the day/night, he’s available to help. Ash is a wealthy blueblood, free spirited, lacking a sense of purpose, experiencing upper class ennui. He has shares in the family holdings, however, he is not the oldest son, so he mostly parties and spends time enjoying the local nightlife. Ren is very serious about his career, almost to the exclusion of his relationship and his personal needs. Even on his downtime Ren travels to markets in search of herbs and material for medicinal purposes. Ash is the antithesis of this and, at times, resentfully acts out by bedding other men. Eventually you know something is going to give.

So, there is infidelity in the first part of this book, no two ways about it. Mostly, it’s not in your face, if that bothers you, but it’s there and it’s Ash’s final transgression that is beyond hurtful to Ren and forms a central part of what transpires and why. Bear in mind, that these are both grown men – Ash was a definite cad, he slept around, Ren knew about Ash’s dalliances and allowed him to get away with them, even justified it –

‘It was one thing to try to make amends when he’d left Ashrian wanting, and another matter entirely when Ashrian had chosen to rectify his discontent by taking another Deir to bed. That rankled far more deeply than Eiren was willing to admit to anyone even when they had already guessed at the extent of his hurt. How could he still hold his head up in the face of Ashrian’s indiscretions if he owned himself so deeply in love with his errant cousin that he preferred to deny or endure his transgressions rather than break off their affair and thereby forge a life without him? Their cousins had urged him often enough to give Ashrian an ultimatum—behave or be done with their affair. Each time, Eiren had refused, saying he had no liking for coercive dealings. But the truth was, he was not certain Ashrian cared enough to want to continue their relationship at the cost of his freedom. were their liaison to end, Eiren was certain he would suffer more.’

After a major betrayal Ren can no longer take anymore of Ashrian’s behaviour. He takes up an offer to leave Rikara and work in another hospital, in Camara, for a year, thus leaving Ash and their relationship behind. Ash is devastated and writes to Ren hoping to reconcile but Ren writes back telling him his letter is meaningless. Ash decides to wait, give Ren time, and when he comes back to Rikara he’ll be able to win his affections again. When Ren does return Ash pulls strings to attend his offical home coming party, normally earmarked for healthcare officials, only to learn that Ren is now mated to another, Firyon. Since Ash has been waiting for Ren to come home with hopes of rekindling their relationship he is shattered.

This really is a book of two halves. There is Ashrian part 1 and part 2. Ash part 1 leaves much to be desired, he is often egocentric and childish. He has a point to some of his feelings, but not to the extent to which he acts out. Even though he wants Ren back he still doesn’t accept nearly the responsibility he should for his actions. Ren part 1 is a kind, hard working man, but lets Ash have too many liberties and works too hard. Ash part 2 makes massive changes to his heart and mind, becomes a better man, worthy of friendship, forgiveness and love. Ren part 2 has come through being hurt, bitter, and resigned to accept bad behaviour from a partner. He now knows there is better to be had.

After Ren and Firyon settle into Rikara Firyon decides to make a friend of Ashrian, knowing fully of his mate’s past with Ashrian. After some snarkiness from Ash and much effort from Firyon, Ash, Ren, and Firyon do become a close-knit group. There is no physical affair between Ren and Ash whilst Ren is mated to Firyon, but there are dreams shared through a bond. Some may feel funny about the dreams that Ren has that pull Ash into them whilst he’s married to Firyon that, perhaps, the dreams are cheating. Firyon knows of the love that Ren and Ash have for one another, that he is sick, dying, that is what led him to Ren, that he is just passing through Ren and Ash’s love, and he is accepting of this fact. On one occasion Firyon said to Ash –

“I’ve often thought that maybe the both of you met in a previous lifetime…. And perhaps ’tis just a whim of mine, but what if you’ve been together before, Ash? Maybe over many life cycles. Though obviously you never soul-bound, else you’d have wed each other long ago. Then again, maybe ’twas as Veres meant it to be.”

“What do you mean?” Ashrian asked in bewilderment.

“Mayhap He didn’t have you bind earlier so that you could lend Eiren to me in this life cycle. To ease my passage from the world.”

“Tis all right” Firyon whispered, correctly discerning his silence, “I’d accepted even before we met that I’d likely never regain my health. But I never imagined I’d get to experience such joy as I’ve had with you. So you see, you’ve given me the greatest gift of all. I’m forever grateful I was given this chance to love and be loved. So many folk never do.”

So much more could be written in this review because there’s quite a bit going on in the book. Know it is angsty, and difficult at times, there are subjects touched on that will intrigue some but bother others. This series really is best read from book 1 through, to get maximum enjoyment. I guess it could be read as a standalone, but I personally wouldn’t recommend it. I also want to say that these are the only mpreg books I’ve ever been interested in reading.

There is a sadness, as Firyon dies, but there is also a lovely HEA in this book, which I found incredibly satisying, particularly in the birth of a son for Ash and Ren and the name of Ash and Ren’s son. So respectful, and endearing, showing how far Ashrian had come. It shows that loved ones can live on in other ways. I loved all 3 of the MC’s. Even though Firyon is not a huge focal point in the book, he is an incredibly kind and strong presence, a conduit for change in Ash and Ren’s life – soothing Ren’s hurt and bitterness, and helping Ash become kinder of heart.

Well, Eressë nails it again for me. Heartstrings certainly pulled at mine, and it’s another wonderful addition to one of my favourite series. I love these mpreg, sci-fantasy, hermaphroditic men with an absolute passion. I hope there is not as long a wait for the next installment in The Chronicles of Ylandre because I can’t get enough.

If you have made it to the end of this review, congratulations are in order. This is a rather long winded review. 🙂