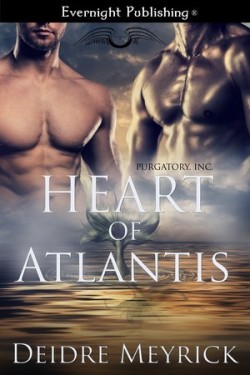 Marin is a cursed merman. He once walked the streets of Atlantis where he found his true love, he now swims—alone. He is offered a way out of his curse and into the heart of another. But will he be able to love another as he did his true love?

Marley’s a loner. He’s a treasure hunter who fantasized about mermen. He’d always felt a little out of place, always searching for something, and wanting nothing more than to belong to someone completely.

Between them are several lifetimes and a wicked sorceress bent on possession. Is a soul deep connection enough to bring them together to break a curse that was never meant to be broken?

This wasn’t a bad short. I actually thought it was okay, but it didn’t wow me by any stretch of the imagination.

I don’t want to say too much about this because it would be very easy to spoil it for people, and I really don’t want to do that. I wish there had been more. This left me feeling unsatisfied and it’s annoying because I wanted to really like this book.

I haven’t read many merman books, so that was interesting for me and something I really liked about this story. I was excited to read about Atlantis and even the couple, Marin and Marley. I guessed what was going on there early on and I was really looking forward to seeing them together.

Unfortunately, both of those things felt underdeveloped. And when it ended I felt like it needed more.

Saying that, there was something about this that I liked. I wanted to get to know the characters better and I wanted to see more of them as a couple. There was some steam, which was nice, and I do have hope that there will either be a sequel or this will be expanded someday.

This isn’t a bad story. It just felt a little too underdeveloped, mostly because of the length. And I still thought it was pretty good overall. I’d recommend it if you’re a fan of mermen and want something short.

Merman sounds good, Trisha. Maybe there will be more of the world and the couple 🙂

And what a cover! I’m thinking this is a new fave for me. 🙂

You just like those hot bodies on the cover 😀