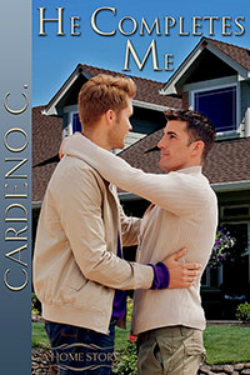 Not even his mother’s funeral can convince self-proclaimed party boy Zach Johnson to tone down his snark or think about settling down. He is who he is, and he refuses to change for anyone. When straight-laced, compassionate Aaron Paulson claims he’s falling for him, Zach is certain Aaron sees him as another project, one more lost soul for the idealistic Aaron to save. But Zach doesn’t need to be fixed and he refuses to be with someone who sees him as broken.

Patience is one of Aaron’s many virtues. He has waited years for a man who can share his heart and complete his life and he insists Zach is the one. Pride, fear, and old hurts wither in the wake of Aaron’s adoring loyalty, and as Zach reevaluates his perceptions of love and family, he finds himself tempted to believe in the impossible: a happily-ever-after.

Zach is a wild child. I think man-whore describes him best. He’s not ashamed of it. He’s forced to return to his hometown for his mother’s funeral. He had turned his back on his family (namely his brother, Dean) and his hometown a decade earlier and never looked back. He is quite happy with his lifestyle in L.A. and plans to come home long enough for the funeral and then hightail it back to his life in L.A. At his brother’s home, he meets Aaron, the best friend to Dean and his wife, Kimmy. There is an immediate attraction between the two of them, though Zach believes Aaron is straight. It wouldn’t matter anyway because Zach is eager to get on a plane and go back to California.

What follows is a sweet, yet at times, strange long distance love story between Zach and Aaron. I will admit that there is one scene in the book that almost made me stop reading it. This was early on and all I could think was how there was no way that I would ever begin to like Zach after that. I was determined to hate his character and I decided then to simply finish the book to just finish it. I am surprised to say that I really did begin to like him and ended up loving him by the time the book ended.

I really loved this story, but there are a couple of things that I felt were either unnecessary or simply not explained. Dean and Kimmy. Yes, I understand how they became close to Aaron. I understand Aaron giving up his life (basically) to be there for them. But I had a very hard time liking Kim AT ALL. It took awhile to warm up to Dean, and even then, I didn’t care for his character much. I guess he redeemed himself (somewhat) when he confronted his and Zach’s stepfather. The issue I had with the two of them was the fact that they used Aaron. It’s like they were totally incapable of doing anything on their own. They are supposed to be successful, college educated professionals, but yet they came across as weak. Both of them. They didn’t take care of their children when Aaron was there. One of them was constantly calling Aaron to come to their house to fix something. The thing that really made me dislike Kim the most was when she showed up at Aaron’s apartment pounding on the door at 8:00 a.m. the morning after Zach came to visit for the first time in months. She invited them for a big breakfast that Aaron and Zach had to make. I kept waiting for there to be some type of argument or something in regards to how Dean and Kim treated Aaron. I kept hoping either Aaron or Zach would step up and say “Enough is enough.” That didn’t happen. Another thing I didn’t like about it is the fact that once Zach moved in with Aaron and they were all living in the same town Dean and Kim pretty much disappeared. They were constantly interfering in their lives when they lived hundreds of miles apart and they were constantly calling on Aaron to come to their house for one thing or another, but yet when they all live in the same town…….. nothing. I don’t get it. I would also like to know what the point was of Kim showing up at the vet clinic to take Zach lunch. The entire thing was unnecessary.

I’m not that big on books where one (or both) main characters say the “L” word so early on. Aaron (who also came across as really weak at times) started saying that to Zach a day or so after they met. While I loved his character, I also saw him as a very weak person who was willing to be treated like crap just to keep the man he loved. He was willing to forgive Zach for anything and everything.

I loved watching Zach’s character grow. I enjoyed watching him go from the wild child man slut to actually caring and loving toward Aaron. I was scared the length of the book would make it drag on and on. What it did was show me how good of a writer this author is. By the time the book ended I was seeing Zach in a new light.

Having read the first edition of this book way back when, I thoroughly enjoyed reading the bonus chapter in the second edition. It takes Zach and Aaron a bit farther in their relationship and I love how that played out.

“I take hold of this bad boy and I can get you to follow me anywhere.”

I love it when a character can turn you around like that. They start out being unlikeable and then they redeem themselves. Cardeno C is very good at making that happen. Glad that the bonus chapter worked.

Thanks, Kazza. I love it too when an author can take a character I don’t like so much and make them one I end up loving at the end.