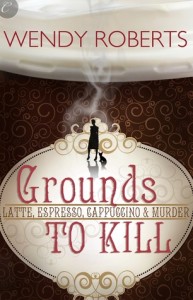 An excellent murder mystery with the backdrop of one of my favorite things… coffee.

Jen Hanby is a barista at a Seattle coffee shop.  Her coworkers joke with her because she has a habit of taking coffee and sweets to a homeless man who hangs out across the street.  She tries to ignore their ribbing but it’s difficult because the homeless man is someone Jen knows well… her schizophrenic father.  Her coworkers do not know this.  They think that she is just being nice to the man.  Jen has another secret that she refuses to share. The itching of her left palm is not a skin condition.  It is a sign that someone, or something, is trying to tell her something.  Jen is right handed but each time this happens, she is able to write a message on a piece of paper with her left.  She doesn’t know where the information comes from and at times she doesn’t even believe that these messages apply to her.  Each time this has happened the information has been accurate.  That is, if Jen is able to interpret what the messages mean each time she receives one.  Not long into the book, she is warned by her Hand of Doom (as she and her best friends call it) that her boyfriend is cheating on her with her half sister.  This, of course, doesn’t happen until after she has just had sex with him.  He confesses and she kicks him out.  No one except her two best friends (Beth and Mallory) know of her odd ability and she plans to keep it that way.  That is, until her half sister (that Jen hates with every fiber of her being) is murdered in her apartment only a few doors down from Jen’s.  Jen discovers the body after going to confront her half-sister about the affair.  Of course Jen doesn’t plan to just confront her.  There is the flinging of dog feces involved.  Before she discovers the body of course.  I admit to laughing over that.  Hell hath no fury, right?

The ex boyfriend plays a big part in the story as he is a police officer.  Jen’s father is a former police officer who years earlier had stopped taking his medication and chose life on the streets over his job and family.  There’s Mitch, a flirty, handsome employee at the coffee shop where Jen works who has suddenly decided that he may just want more than friendship with the now single Jen.  Beth and Mallory play a huge part in the search for the murderer and then there’s the bitchy, nosey neighbor with the psychotic grandson.  Throw in a transvestite hooker named Kiki, an expensive psychic (who may or may not be for real), a mean detective and an adorable dog and you have one hell of a great story.  The mystery was written very well, though I figured out who the killer was early on. The messages that Jen receives are so cryptic (with the exception of a couple) that you follow along as she and her friends try to figure out what they mean.  The way everything comes together is perfect.

Overall, I have to say this was a really, really good book.  The mental illness is not glossed over and it is written well.  The book has its serious moments but there is quite a bit of humor tossed in as well.  I can’t wait to see what this author comes up with next for these characters.  I will definitely be reading the next in the series and any other this author has to offer.