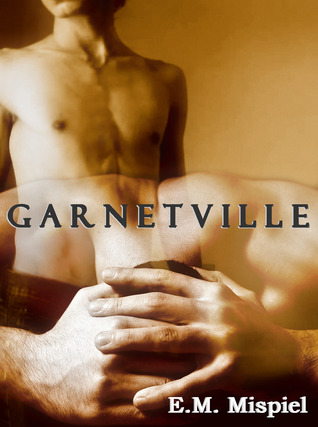 First of all, I do love a murder/mystery and if it’s a good one I’m positively delighted. I also love a good LGBT book as well. However, I’m not too fussed with books featuring university/college aged guys; I usually avoid them like the plague. But thanks to a knowledgeable friend I was pointed in Garnetville’s direction. I am so glad because without her sage advice I probably would not have bought this fantastic book, and I would have missed out on one of this year’s best books.

Apart from my love of murder/mystery and M/M, I also love clever, sharp, witty, dry, dialogue, observational writing, and interesting characters. So, lots of ticks happening for me. I also have a fascination with small towns, as much as I often don’t like the small towns in question. As a small town, Garnetville did not disappoint me.

I can’t fully review this book without giving away spoilers, which would just ruin everything, and I refuse to do that. So I just want to give the basic premise, with some, OK, lots of quotes, because I clipped the living daylights out of this book, believe me, everything seemed necessary at the time 🙂

Dave Novak finds out his from his mother, still a Garnetville local, that Dave’s teacher, Mr Shumaker has been murdered. Several months have passed and no-one has even been narrowed down as a suspect. Dave, a journalism student, decides to go back home and find out just what happened. His housemate, Quinn, decides to tag along. Mycroft Shumaker was sacked from his job as a teacher from the local school, basically for being gay, well, for having a melt-down where he also outed himself as gay. I’ll let Dave’s words to Quinn tell the story –

“It was after his father died that Shumaker came unglued. Rhonda had a crush on him, and she wasn’t subtle about it. Wouldn’t stop flirting so he had to swat her like a fly. Splat, with her guts oozing out and everything. He ripped into her. Told her to go fuck herself. I’ll be quoting this next part ‘I will never be interested in you Ms McNaney, for two reasons. One: you are a complete waste of human parts. Two: I like cock.’ I’ve heard versions of the rest, but let’s say he stopped just short of spitting on her. I’m not sure I would have.”

In a good (?) Christian town no-one wants a gay school teacher, and no-one cares one iota that the ‘gay guy’ is dead. Except Dave, Dave cares because he had an affinity with/affection for Mr Shumaker, but not as you may suspect – you need to read the book because the story is important and a good one.

There are two protagonists in Garnetville, Dave and Quinn, however, there is also a third, primary, voice, Mycroft Shumaker, beautifully bought to you by way of flashbacks. As literary devices go, flashbacks can be annoying. However, when used correctly, as they are in Garnetville, they can be illuminating, as was the case here. Without flashbacks Mycroft Shumaker would have just been a  murder victim without meaning, just a dead, gay, ex teacher; and David’s cause, his desire to catch a murderer, and give someone a voice, including himself, would not have had true effect.

There is a camaraderie already between the two protagonists, Dave and Quinn, albeit an awkward one. They get closer as the book progresses in a funny, offbeat sort of way. It’s pretty typical of the real world, and young guy’s behaviour. These two are not the usual idealized ‘type’ that appears, more often than not, within the M/M genre. The writing from a young (gay) male’s perspective is bloody brilliant. Their characters are perfect. E M Mispiel nailed the characterizations of these two students. The other characters weren’t lacking either; every single character was multi-layered and real. I would dare a reader to say that they haven’t encountered at least a couple of these people in their life, or at the very least known of them. Everything and everyone was painted with such clarity and purpose as to make you feel like a fly on the wall of the town, the people within, and the MC’s lives.

And as for the mystery, it is so well done I could not, for the life of me, work out who did it until the reveal. I was so impressed!

Mystery is the number one component, along with the intolerance of small towns, the need to get out of these towns, or be swallowed, soul and all, by them. It also looked at Dave’s love of his mum, his empathy, understanding of what it’s like to have little to no joy, why people do what they do because of that, and his lack of judgement about them for it. Whereas Quinn doesn’t get that, that doesn’t make him a bad guy, just typical of a young guy from another place and family. For Quinn it was different he had been cloistered just a bit more than Dave, which coloured his understanding of why people would drink so much, and the fact that an adult is responsible for their own life. You can’t preach, you have to let people deal with their own lives, in their own way.

Observations on the town –

In a few hours Quinn would see this place called a small town – a quaint little nightmare for people like them.

The longer Quinn spent in Garnetville, the more the place seemed to shrink. He couldn’t imagine growing up here or living here. There was nowhere to go and nothing to do. No wonder Dave did whatever it took to get out.

“Any more legwork?” Quinn asked hoping for a no. Since the sheriff’s stepdaughter, it had all been downhill, just depressing and unattractive, poor people.

“Keep your eye out for a boy and a girl seven, eight, nine.” Quinn didn’t have to look hard. There wasn’t anybody around of any age.

Observations on a few of the locals –

“Any of you go to Shumaker’s funeral? Dave asked. “Hah. Who would?” She asked genuinely perplexed. “Some,” Dave said.

“Tom or Willy say anything when it happened or after?” She thought for a minute. “Tom said it was a male hustler – you know a prostitute but a man – that did it so he could rob him. That’s how all homos get murdered.” Dave and Quinn just stared. Clearly someone had explained this to her and done a bang up job.

“You ever do jobs for Shumaker.” ‘‘Shut the fuck up!” Willy came toward Dave, with a screwdriver in hand. “Look out Davy, he wants to screw you,” Quinn said with a smile.

And Quinn’s reactions to them –

“Hey, fag!” Dave turned. “I don’t usually turn when people call out ‘fag’,” Quinn said, but he turned too.

“You know I hate peas, don’t you?” Quinn accused. “Yeah, I keep a list of your likes and dislikes, Quinn. All written up neat-like in two columns,” Dave said before leaving.

“I didn’t say I was never in a fight. I said I wasn’t beaten up. I won every fight I’ve ever been in,” Quinn claimed. “Who against? Your sisters?”  “Sometimes.”

“More churches. A churchy did it! I knew it! This was Quinn’s favourite theory after all.
“I’m only interested in secret boyfriends.” “So am I.” “That’s the only kind you’re going to get with your taste in guys,” Quinn predicted. “Like you’re knee deep in quality cock meat. You have any boyfriends you haven’t chased away?”

Quinn honestly didn’t understand Dave’s taste in men. Every one of them looked like he was at least a shoplifter if not worse. If they were stand-ins, then Dave was trying to fuck the whole town of Garnetville by proxy.

“Do you have to be so fucking fucked in the head? You can’t imagine anyone giving a shit without their dick being the leading cause.” “That’s because dicks are the leading cause of everything.” How did Dave not know this?

“I’m going to fuck the life out of you,’ Quinn announced. “I would appreciate it.” Dave arranged himself on his bed. “First time on here? On this bed? Yes?” “You like a virgin bed, do you?” “Yup.”

Mycroft Shumaker in dialogue with Dave –

“Read this. What’s wrong with it?” Davy stuck out a paper in front of him. It was an essay with a grade of D on it. Mr Shumaker looked at it, but would not take it. After examining it for a few seconds, he took his eyes from it. “First there is a big letter D. And see all these little, red markings? They might give you a clue.” He pointed to the paper without looking at it himself. “No, they don’t. I can’t be getting D’s. I need a scholarship.” “Rewrite it.” Davy took a moment to absorb what Mr Shumaker said. “And?” “Bring it back and I will grade it for you. Bring the original too.”

“ Every gay man should have pussy at least once so that he can silence those who would say that he should not renounce what he has not tried.” After thinking a moment, he added. “Unless you’ve already had it, then never mind.” “I can say I tried it without doing it,” Davy pointed out. “Ingenious. Why didn’t I think of that?” “The less I know about your sex life the more likely I’ll be to keep my food down.” “And deny you the benefit of my worldly experience?”

“Nothing can hurt you like memory. Memory isn’t the truth. It’s truth poisoned with emotion. Like if you took a perfectly fine creature.” Mycroft held up his hand as if he was holding something small on the palm. “Let’s say a small lizard. And you bathed it in acid but let it live. That’s memory.”

Looking on, Dave had the distorted impression that this was that other crime. That Mycroft Shumaker just died, just then, not months before. The events of this night were still a nightmare grown unconvincing when considered by the waking mind. He couldn’t yet take in what had happened or what still might.

This book is deeply touching, yet it is not sentimental. It shows what people can do when they think they’re helping…but aren’t, and what people can do when they act as if they don’t care…but do. It also shows what can happen when someone has some passion; quiet, sarcastic, witty, passion works just as well as the loud and proud kind. It only takes one to make a difference.

I cannot recommend this book highly enough to those who want to think, and like – or are comfortable with – LGBT literature. And make no mistake, this book is a fine piece of literature: A Dangerous Man and The Cool Part of his Pillow were contemporary revelations to me in terms of LGBT writing. Garnetville: A Gay Novel is another revelation. Please, please write more books E M Mispiel.

ETA: December 2016: This book holds a special place in my heart. It’s what brought Cindi and I together as blog partners and friends, The writing in this book is so beautiful, clever, and witty, I just wish E.M. Mispiel would write again. People have been enquiring on our old Blogger site about you E.M. Mispiel – if you ever read this, please come back, the genre needs you.