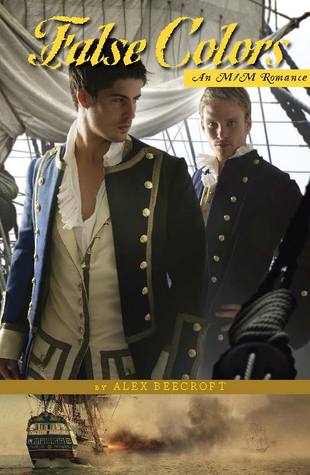 John Cavendish is a Lieutenant in the RN. He is given the temporary title of Captain for a specific mission on a substandard, captured bomb ketch, the Meteor. It is an…interesting mission given via verbal command from an Admiral; being sent out to persuade the Dey of Algiers to stop piracy and the kidnapping of British citizens. A dubious mission with not only a ‘leaky ketch’ but a rag tag, ill-disciplined crew. It is here that John Cavendish meets Lt. Alfie Donwell who has volunteered for the mission. Lt. Donwell, who makes it known he has designs on Cavendish, is charmingly flirtatious. But while Cavendish finds himself interested in and aroused by Alfie, his strict religious beliefs do not allow him to give in to such notions. When on mission Alfie is captured and tortured, then rescued by Cavendish. Likewise Cavendish is wounded in battle and nursed by Alfie. Alfie feels within himself that these things have progressed their status, their feelings for one another. Certainly Alfie feels love for Cavendish. And while the reader knows Cavendish has developed some depth of feelings for Alfie, he is a Quaker with strong religious beliefs that are not easily changed. A comment, a look, a judgement by Cavendish sends Alfie with a heavy heart and fear back to his old fancy and captain.

John Cavendish annoyed me initially. I was all about the more carefree, heart-on his-sleeve, music-loving Alfie Donwell, but, by God, as the book progressed, that changed so much. John Cavendish’s growth truly started for me when he thought of empathetic application of a scripture from the Bible – take your pick Luke 6:41-42 or Matthew 7:3-5 – when looking at the behaviours and the ability of people to find fault with others without acknowledging their own shortcomings. And shortcomings there were – punishing men for completing a mission successfully, turning a blind eye to politics that hurt others, a heterosexual parent who lived a free life for himself but hurt his wife and son, young boys and older men alike strung up for daring to love.

When Cavendish could not tell the Admiralty of what he knew. When he did not report men trysting together on another ship. When he selflessly protected Alfie, almost to his own detriment, even when Alfie thinks John has deserted him and is harsh in his thoughts and actions, I loved John Cavendish more and more. John is a true friend and a decent, loyal man. From a naval perspective he is an amazing asset – a brilliant tactician, he garnered support from several different crews, he cared for ordinary men ill with Yellow Jack, and when the pressure was on, he also thought on his feet. Yes, Alfie, you were right, John should have permanently been a captain in his own right. With his own command. I totally adored John Cavendish. Someone who had to fight his belief system and his upbringing to dare find his place. To believe that love is love irrespective of gender.

Lieutenant Alfie Donwell was an interesting character. A man who has been at sea for approximately eleven years, since barely a teen. A man who is an officer that would stand and fight from the front and yet yearned for a permanent man in his life to love and cherish him. A man he could love, someone who would give their heart unfettered to him. He longed for something that was nigh on impossible for the time, but why shouldn’t someone be able to love and be loved? He thought he saw it in Farrant, who at least would lie with a man. He hoped for it in Cavendish, who rejected him initially through his sheer inexperience and Quaker/Bible inspired guilt. Alfie was  hurt by both, but Cavendish broke his naïve heart and Alfie was a man who wore his passion and heart on his sleeve  –

Alfie’s mind returned to John, summoning his scent of tar and ink, and the honey he spread on biscuits when he couldn’t get toast. These were John’s hands on him, John’s slender body covering him, John’s cock for which he spread his legs and begged. It was dream-John into whom he nestled afterwards, and slept. But it was Farrant beside him whom he awoke.

“I loved him,” Alfie murmured, soothed too by being able to speak to someone who understood every nuance -understood even the words he did not say. “He despised me for it.“

Captain Lord Lisburn, or Charles Farrant, runs what you would now term a gay friendly, close-knit naval ship, HMS Britannia. His crew are carefully chosen for their sympathies and sensitivities. Anyone who would be deemed a prig, or might go back to the Admiralty, is shipped off and replaced with someone who is up for sex with the captain, or is at least tight-lipped. He is a man who cannot fit into his breeding, although given some protection because of it, into his sexuality and his fear of being an abomination, yet not being able to curb his urges. He’s a very complex man that comes off as having once been caring, but now more cynical, defensive, and cruel through years of being worn down by his desires. Having to marry, have heirs. Staying away from his wife and children, hurting everyone including himself.

After receiving a letter from his wife  –

…he looked away, planting his elbows and bowing his head into his hands. “The children do not miss their father…..”

“I will take your drugs.” Farrant closed his eyes and in the darkness fought that part of himself that screamed protest.

“For her, for them, for you. If you tell me one thing. Is there any chance of a cure? Must I stay half-dead forever?”“

Dr Bentley, Farrant’s personal physician, believes he has the ‘cure’ for sodomy. He doses Farrant with opiate’s, predominantly laudanum, to dull his desires.  Bentley is over zealous, with an agenda. His ‘righteous’ desire for a cure was irksome to me –

You have a disease and, until I can affect a cure, I must address the symptoms.

There is much action in this book from pirates to fighting, to capture, to torture, to time spent in Algiers, Jamaica, Gibraltar, and the Arctic for scientific exploration. There is a love triangle of sorts, and deep emotions to work through, including much misunderstanding. I would normally be frustrated with the length of time it took the couple I was hoping for to get together, to sort through their problems, but here I loved every minute I waited on the edge of my seat, my heart in my mouth. I adored the action and terminology and what these men did. There could be no easy declarations of love with the threat of a noose around your neck. There was much to explore and that happened. John Cavendish needed to find out what he wanted without God and guilt getting in the way. Alfie needed to know who Farrant really was, who John really was, and in a time of his greatest need, who would be there for him and who would not. There was growth required and decisions to be made, by all parties, amongst the backdrop never standing still on sea or on land. Once again Ms Beecroft paints such a vivid picture I felt I was there as the cannons blasted away, as an iceberg nearly took all of a ship. She also painted a heartbreaking picture of what it must have been like to be born same-sex attracted in this era. I admit to crying during this book on several occasions for personal reasons. It moved me and I appreciate just how timely some of the thoughts and meanings were/are. The difficulty in being gay and religious. They shouldn’t have to be mutually exclusive.

The writing is so lovely and romantic –

Alfie was beautiful. Not with John’s mere surface, accidental beauty, but beautiful in his youth and strength. Beautiful in the open honest way his soul seemed to show in his face. Tall and sturdy, he moved  like a dancer, as though every step was a pavane. Arrested by the perfection of the angle between Alfie’s shoulder and neck, John stood and looked, and found he had no words.

“Is it truly so terrible to set one’s heart on finding love? (Alfie’s thoughts.)

“If this is a sin, John said quietly, “is it wrong for me to cherish hopes that it will go on forever?”

It is real and harsh. Capturing the essence of the times –

It was a flawed, impractical, ugly world, but it was better than the alternative. His mind filled with the pictures of the last hanging he had seen; some poor little bastard with the rope around his neck winched up to the yardarm by the throat – too light to strangle quickly. In his struggles he had got the knot under his chin, so that the pressure meant to mercifully stun him ended up as one more torment.

By the chicken coop, a bird under his arm, his foot caught in a twist of rope, lay the corpse of one of the powder monkeys – a boy nine years old…“Samuel Jenkins,” John whispered above his head. “The bird was his pet.” “Oh, God!” Alfie hitched a breath, covered his eyes with his hand and shuddered. The boy had come to rescue his pet and been trapped as the water rose.

“These are all our Britannias, injured in our own battles. Of your own ship, I do assure you, you are the only one left.” This was surely another dream, for God would not spare John, who was wrongly made and deserved execution, while allowing the innocent boys to die.

After reading several of Alex Beecroft’s books, I have to say that she is a superb writer. If you enjoy well written LGBTQ fiction, romance that is historical, perhaps Age of Sail, with interesting and multi-dimensional characters who make you ache for their predicament, I highly recommend False Colors. And one last thing, the title is perfect. False Colors is what a ship would fly to hide who they really were. And it is with that I’ll leave you with some thoughts of John Cavendish –

There was no prudence in the way he worked his fingers into Alfie’s fists. When  they opened, obediently, he lifted them, one after the other, to kiss the palms. Pure folly, a risk to name and fame and life itself, but oh, it felt so right. He hauled down the false colors under which he had been sailing all his life, and exchanged them for true.