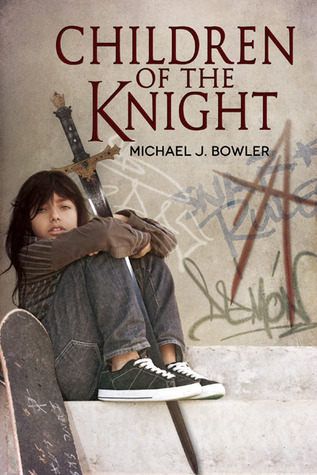 “Once upon a time in the City of Angels, chaos was king, and carelessness ruled.”

Children of the Knight is one of those stories where you start reading saying to yourself “that’ll never work” and then 6 hours later you put it down sobbing, having read one of the best young adult books currently in publication.

Lance is 14 and homeless, he spends his days either dodging gang members or on the rare occasion attending school. Lance has no family and there are not many people in his world that care for him. This is a depressing situation but he loves skating and has a life dream to win gold at the X Games.

One night Lance finds himself in a tricky situation with a couple of gang members over his refusal to sell drugs for the boss. In rides a knight with shining armour who upon questioning reveals himself to be the King Arthur of the legends, come when the need is greatest to establish his second Camelot.

Arthur and Lance then travel the city taking in lost, homeless and neglected youths building an army to join in Arthur’s crusade.

What I LOVED About This Book

Never before have I been presented with such great characters, especially the children/teenagers. Each person has their own fleshed out back story explaining their thoughts and motives. You will fall in love with some of these kids, Lance, Jack and especially Mark, you will laugh with them, cry with them and you feel a genuine connection to them.

The author brings across excellent themes dealing with the problems facing these young teenagers in their world of Los Angeles. Predominant is the vast array of children having been abandoned or abused left to wander the streets, afraid of the authorities. Arthur’s crusade gives these youngsters the chance to have the home and family they never had. Another recurring theme is that of redemption. Arthur strongly believes in this and will take on those who’ve been in gangs or caught up in drug use and prostitution.

The story does investigate why sometimes children will stoop to these incredibly low levels just to survive.

Arthur “This doth be thy work, selling thy most private parts to strangers?”

Mark “Our privates is all we got, mister, if we we wanna eat…”

Mark is one of the most tragic stories in this book, kicked out of home at 13 for kissing another boy in the pool house and finding himself penniless, addicted to drugs and selling himself on the streets of LA by the time he’s 15. Arthur takes him, like many others under his wing.

With all these youngsters on board Arthur builds a movement to rejuvenate and clean up the city giving all his orphans and strays a strong purpose in life to help those weaker than themselves. Through these activities each of his protégés find their own purposes and discover the good within themselves.

The One Slightly Annoying Part

Arthur’s voice at the start of the book feels very corny.

“Hast thou no manners, to not thank me for thy life?”

While it felt less and less out of place as the book continued it definitely had an impact early on and felt distracting. I understand the point to establish a language barrier between Arthur and the children but his speech feels like it’s from the time of Shakespeare and not 1000 years earlier as it should be. Of course this is a conundrum, if Arthur spoke the language of Britain in 600 A.D. no-one save a specialist professor could understand him and if he spoke perfect modern English it would again feel out of place. Luckily the book was so enticing that in the end it wasn’t really a drawback.

I would highly recommend this book to all those who wish to see the impact our world is having on children and the depths of abuse and neglect which is occurring out there. Even though there are fantasy elements in this story I would highly recommend this book to everyone who would like to see a realistic story of redemption, full of love and loss and how by giving a child a glimmer of hope the world can become a better place.

“Once upon a time in the City of Angels, the children did lead, and the people had hope.”

NB: I was originally supplied a review copy by the publisher but I enjoyed it so much I actually bought my own copy.

Great review. I am so going to read this book soon. I have it on my Kindle just waiting on me. 🙂

Josh’s first review and it is so good. I think we will hassle him for more. Crank up the emails to Josh 🙂 I want to read this book too. But be warned, there is a BIG tissue warning on it.

I think we should hassle him for more. 🙂 I have my tissues ready and as soon as I can I’m reading it.

I have hassled him. Poor guy. He is reading another one for review now. Prepare the tissues!