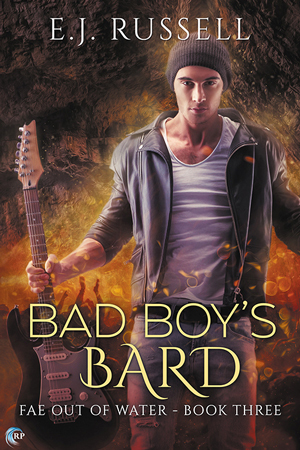 As far as rock star Gareth Kendrick, the last true bard in Faerie, is concerned, the only good Unseelie is . . . well . . . there’s no such thing. Two centuries ago, an Unseelie lord abducted Gareth’s human lover, Niall, and Gareth has neither forgotten nor forgiven.

Niall O’Tierney, half-human son of the Unseelie King, had never lost a wager until the day he swore to rid the Seelie court of its bard. That bet cost him everything: his freedom, his family—and his heart. When he’s suddenly face-to-face with Gareth at the ceremony to join the Seelie and Unseelie realms, Niall does the only thing inhumanly possible: he fakes amnesia. Not his finest hour, perhaps, but he never revealed his Unseelie heritage, and to tell the truth now would be to risk Gareth’s revulsion—far harder to bear than two hundred years of imprisonment.

Then a new threat to Gareth’s life arises, and he and Niall stage a mad escape into the Outer World, only to discover the fate of all fae resting on their shoulders. But before they can save the realm, they have to tackle something really tough: mending their own broken relationship.

About the Fae Out of Water Series 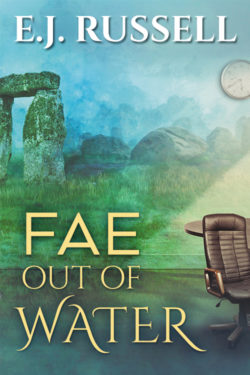 Once upon a time, there were three brothers, nobles of the Seelie Court of Faerie, who set out to seek their fortunes. The eldest—

Nowadays, when tales are told in 140 character bursts on tiny LED screens, rather than spun out by the glow of a midnight campfire, even Faerie’s elite have to get with the program.

The Kendrick brothers have traded longbow for briefcase, battle steed for Harley, and enchanted harp for electric guitar.  But while they’re finding their feet in the modern world, instead of finding their fortunes, they stumble straight into love.

Check out Fae Out of Water!

E.J. Russell holds a BA and an MFA in theater, so naturally she’s spent the last three decades as a financial manager, database designer, and business-intelligence consultant. After her twin sons left for college and she no longer spent half her waking hours ferrying them to dance class, she returned to her childhood love of writing fiction. Now she wonders why she ever thought an empty nest meant leisure.

E.J. lives in rural Oregon with her curmudgeonly husband, the only man on the planet who cares less about sports than she does. She enjoys visits from her wonderful adult children, and indulges in good books, red wine, and the occasional hyperbole.

To celebrate the release of all three books in the Fae Out of Water series, one lucky winner across all three tours will receive a GRAND PRIZE of a $50 Riptide credit! Leave a comment with your contact info to enter the contest. Entries close at midnight, Eastern time, on September 23, 2017. Contest is NOT restricted to U.S. entries. Thanks for following the Bad Boy’s Bard tour, and don’t forget to leave your contact info!

Thanks for the post, and congrats, E.J. This sounds like a great series. I love fantasy and fae, and to put them in a modern setting with all that entails will be a joy to read about. – Purple Reader,
TheWrote [at] aol [dot] com

good luck with the release! Thank you for the interesting blog tour!
humhumbum AT yahoo DOT com

I’m looking forward to reading these!
jlshannon74 at gmail.com

Totally enjoying the tour and the tidbits you’ve shared. Congratulations and much success!
taina1959 @ yahoo.com

Thanks for the blogtour! I hope you’re having an amazing release week!
serena91291@gmail(dot)com

Thanks so much for hosting me today! It’s been a great release week, thanks to the the support of the wonderful bloggers on the tour, and the folks who’ve stopped by to comment. Thank you all!

You’re welcome on behalf of our blog, and it is nice to see people support the tour. Cheers!

Great series. I really enjoyed it.