Book Tour: All That Has Flown Beyond, Marina Vivancos 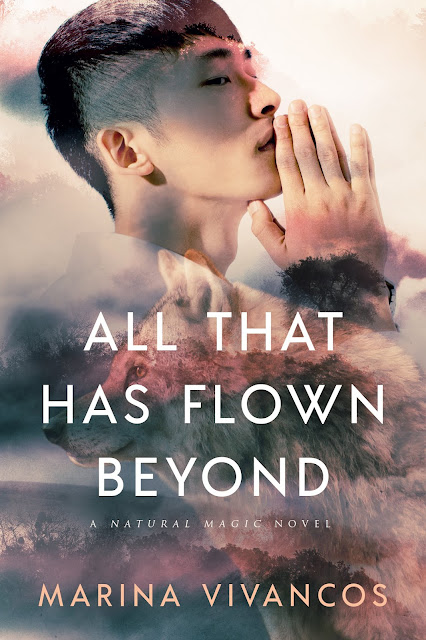 Kaiyo’s bloodline has been part of the Garrow pack for generations. He has been destined to be shaman, to anchor the werewolves to the land, and lend aid with the force of his Ousía. When Kaiyo is fourteen, however, an attacking group kills all of the adults in the pack, leaving young Ahmik, only fifteen, as leader.

Their worries don’t end there.

Smelling blood in the water, enemies hunt the decimated pack from all sides. Kaiyo grows increasingly reckless in his desperation to defend his pack, to finally grow into his shaman powers, and to protect Ahmik: the boy he loves.

In the end, Kaiyo loses his pack anyway.

Packless, landless, Kaiyo drifts. For ten years, he fights to remake himself into the shaman, and the man, he was meant to become. One phone call from his old pack, though, and he is forced to return.

Something is killing children and Kaiyo is the only one strong enough to stop it.

Kaiyo never thought his journey would take him back to his old land, his old pack, and to Ahmik. Forced to face his past, and the wounded love that still aches for Ahmik, Kaiyo will be tested like never before.

Content Warning: This story contains themes of depression and associated thoughts and behaviours. However, as always, it focuses on recovery and strength.

This book takes place in the Natural Magic world but can be read as a standalone.

Dec 3 – Megan’s Media Melange, Archaeolibrarian – I Dig Good Books!, On Top Down Under Book Reviews, Dec 10 – Bonkers About Books, Wicked Faerie’s Tales & Reviews, Dec 12 – Mirrigold: Mutterings & Musings, Bayou Book Junkie, MM Good Book Reviews, Book Review by Virginia Lee
Author BioWhen Marina was a child she couldn’t sleep. Night after dissolving night she just couldn’t sleep. Nothing much worked – until she started making up stories in her head. Suddenly, the transition into unconsciousness was a smooth dive into calm waters.Marina is currently in a period of sleepless upheaval, and she hopes writing down the stories in her head will cast the same spell it did decades ago.Marina hopes to write in a variety of romance sub-genres, from contemporary to supernatural to sci-fi. Her style, however, tends to focus on character-centred stories that explore different facets of the human experience, such as mental health. She also enjoys writing explicit, drawn-out sex scenes, so expect those to be a prominent feature of her stories.Marina tends to keep to herself unless prompted, so don’t be shy in approaching her!
Twitter | Facebook | Website