Thaddeus and Sarasija are spending the holidays on the bayou, and while the vampire’s idea of Christmas cheer doesn’t quite match his assistant’s, they’re working on a compromise. Before they can get the tree trimmed, they’re interrupted by the appearance of the feu follet. The ghostly lights appear in the swamp at random and lead even the locals astray.

When the townsfolk link the phenomenon to the return of their most reclusive neighbor, suspicion falls on Thaddeus. These lights aren’t bringing glad tidings, and if Thad and Sara can’t find their source, the feu follet might herald a holiday tragedy for the whole town.

Sarasija’s arrival replaced peace with joy and meditation with laughter. And the stillness of chant with…Lady Gaga.

Delightful Christmas novella with just a bit of bite inserted into the Hours of the Night series. The first book, Vespers, has much more intensity to it. Even though Bonfire is part of a series if you want to get a feel for the MCs then this is an inexpensive and quick way to

do it, and the authors catch you up on some basics. Is it better to have read the first book? Sure, but it isn’t absolutely necessary. It depends on what kind of reader you are, if you absolutely need a series in order. In my opinion, you can enjoy this for what it is – a fun Christmassy read featuring a protective demon hunting, Catholic vampire and his (fairly new) assistant, Sara, in Thaddeus’ home town. In Vespers more time was spent in the city of New Orleans, this time the bayou and neighbours figure prominently, including a snapshot of what locals think about their private neighbour – some tolerant, some not so much.

Sara and Thaddeus are getting to know one another a bit more. The feelings in this book are 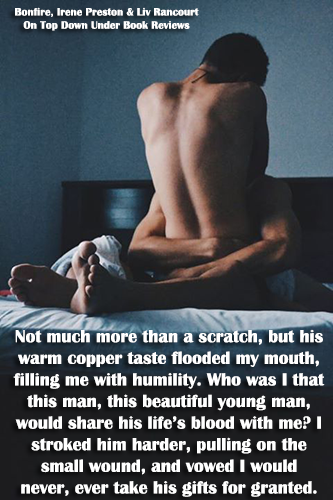 more relaxed as they have some down time for the holidays, as they’re finding their way. Sara is gregarious and friendly. Thad is reclusive and very aware of all the things that can go bump in the night. Thaddeus has yet to fully grasp the words team player, because he worries about those he cares for, but Sara is making sure he’s heard. Thaddeus is Catholic, Sara, while atheist, comes from a Hindu family. Thaddeus has been around for over a century and a devout Catholic and, accordingly, is hyperaware of anything that could be seen as homosexual when out and about. Sara is out and proud. There’s some nice compromising. It’s all paced well for the series. Baby steps. Thaddeus has never had a Christmas tree, Sara loves them. Thaddeus is not interested in material possessions, Sara loves a present-laden Christmas, including the cheesiest sweaters, Christmas lights, and well known Mishra family traditions.

Apart from watching episodes of Antiques Roadshow together, making love – with a less  guilt-ridden Thaddeus, and both of them occasionally pondering what may or may not be 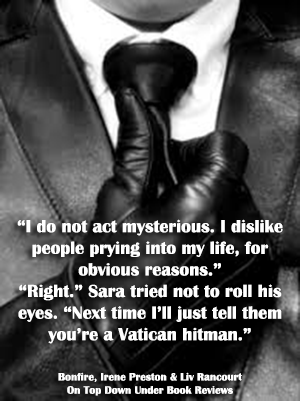 coming at the end of Sara’s contract, there is a mystery involving lights – maybe feu follet – that have people getting drawn into the swamp, being mesmerised and behaving oddly. All roads, or boats, lead back to Thaddeus’ place. So Thaddeus is called on to help sort things out, kind of thrown into it, and he can’t help but help.

I loved being back with Thaddeus and Sara, they’re so different and so wonderful together, and this story was sexy and sweet and romantic with a mystery. Not as action packed as Vespers, but that was the point. Not too much more to ask for. I do adore Thaddeus. *sighs* Mostly, Bonfire is one lovely Christmas novella. I’m so glad to have had the chance to see more of two of my favourite characters in this really well written and enjoyable Christmas story. 4.5 Stars!

Don’t you just love revisiting beloved characters? This looks like a great addition to the series. I love catching up with characters a little later.

Great review. The visuals are, as always, perfect.

I love catching up with characters I’m invested in, but I also get nervous about it. This was a lighter novella for us series readers, I guess, and for a look at Thaddeus and Sara’s first Christmas together.

Thanks, Cindi. I love the quotes in the visuals, they are so beautiful, or in Sara’s case, funny.

I’m tempted to read the series so I cud start here & then read vespers later?

Yes, I definitely think so. You get a good feel for the characters here, although not the start of their relationship. I hope you read and enjoy them both, Peta 🙂