Between Sinners and Saints, Marie Sexton 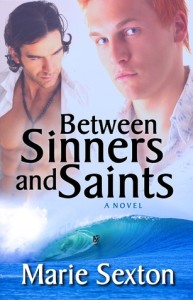 Two men who consider themselves to be damaged must fight the trauma of past sexual abuse, religion, overbearing family members and other major issues to come together in a beautiful and touching story.

I will start this review with a disclaimer.  This book was chosen for me by ‘Shanna’ in a group I participate in on Goodreads in a pick-it-for-me challenge.  Between Sinners and Saints was chosen from my own personal to be read shelf having been added a year and a half ago (and completely forgotten about).  I was hesitant to read this book for several reasons.  One, I have read other books by this author and they did not click with me as they seem to with others. Two, I have a major issue with reading a book that is full of exclamation points used constantly in dialogue.  Marie Sexton is well known for using them on almost every page.  Three, this author tends to lean toward open relationships in books (at times thrown in without warning to the reader) and all who know me know that I shy away from that.  Four, this book is long by my standards at 377 print pages according to Amazon.  I had committed to reading whatever was picked for me so I dove into this one not expecting much.  I feel the need to point that out before I continue.

Levi Binder is a thirty-year-old self-described man slut.  He works as a bartender at The Zone, a gay bar in Miami. The Zone is well known in the area as the place to go if you want to hook up. There is a storage room in the back that is used for that purpose by employees and patrons alike.  The owner not only looks the other way, he encourages it, even making sure the small room is stocked with supplies: condoms, lube, Vaseline.  Levi uses the storage room often, hooking up with someone different almost every night of the week.  There’s no emotion.  Only sex.  He likes it that way.  His move to Miami years earlier was not to find excitement in the  city.  He ran from his parents and purposely chose a place to live solely to anger them.  Having grown up in a strict Mormon family, Miami was his way of saying “Fuck you” to the family who constantly tried to change him, to get him to denounce his homosexuality.  What better place to do that than a city like Miami?

Jaime Marshall is a licensed massage therapist.  He is a loner having no relationships of any kind (family, friends) other than with his clients. Jaime experienced horrific sexual abuse as a child and now, in his mid-twenties, he is still dealing with the trauma of those events.  He can not be touched .. by anyone.  He considers himself to be gay but there is constant doubt and guilt as a result of what he endured as a small child.  Did the abuse make him think he was gay?  Could the abuse have turned him from a would-be heterosexual to thinking he’s homosexual?  Jaime’s past is with him constantly, in every single thing he does.  There are nightmares night after night.  He refuses to go out. His only companion is his dog Dolly. He lives in constant fear, keeping the doors to his house secured with more locks than would be considered normal.  The mere thought of being with anyone.. male or female… sets off panic attacks that are later accompanied by the nightmares.

Levi experiences severe pain that radiates from his lower thigh to his buttock muscle.  This is aggravated night after night while tending bar. He is also an avid surfer and the pain has tamped down on his favorite hobby.  It is suggested that he go to a massage therapist, one who specializes in deep tissue massage.  It is by taking this advice that Levi meets Jaime Marshall who becomes his new message therapist.

Levi comes from a very large Mormon family that lives and abides strictly by the teachings of their church.  I am not Mormon nor do I know much about the religion so I have no right to judge nor will I.  But I found myself angry over and over about Levi’s interactions with his family. There are frequent phone calls from his mother telling him to denounce his ways or go to hell, each call leaving Levi full of guilt for not living up to his family’s expectations and standards. Then there is a sister, Ruth, who is more of a go-between between Levi and his parents.  Each time he is guilted into going home for visits, Levi is ganged up on.  His father Abraham calls a confab (which thankfully the author described where the reader would understand it) where each family member, parents as well as all siblings, have a formal family meeting of sorts.  Each meeting discusses various things regarding the family and any issues… both old and new… in regards to the family.  The number one item discussed is always Levi and his sinning ways.  Each of these meetings has various family members attacking Levi verbally and telling him what he would do (not should do) to change his lifestyle according to the teachings of the church.  At no time are Levi’s feelings or wants considered.  If the decisions are made (voted on by the family members) Levi is expected to abide by them without question regardless of his own views or the fact that it is his life.  I did not understand this but I respect that each religion is different so I did not allow that to detract from the story for me.  I admit to getting angry many times in regards to it but I tried to respect the process regardless.

When Levi meets Jaime for his first message appointment, Levi is determined to make Jaime his next conquest. Jaime has that shy boy next door thing going and Levi refuses to take no for an answer.  He will have Jaime in his bed no matter what.  All it will take (he thinks) is a little seduction and maybe a little strong-arming and he will have Jaime.  What he does not expect is the other man to literally freak out and to throw him out after only a few visits. Looking at Jaime during his refusals something clicks with Levi. Jaime is not just saying no.  The man is terrified. This hits on something inside Levi and after weeks of trying to make Jaime just a sexual conquest, Levi has now suddenly realized that he must fix whatever is wrong with Jaime and protect him at all costs. This happens over a period of weeks with something clicking inside Levi that he has never experienced before. Jaime is no longer seen as a sexual conquest.  He is seen as the one person who maybe, just maybe Levi can love. This realization sets about major changes in Levi’s life.  He can not keep working at The Zone and be the man Jaime deserves.  He can no longer hook up with random strangers without feeling guilt over Jaime.  Though the two men are not yet in any type of intimate relationship, Levi still knows he must change… for Jaime.

I have to say that around the first third of this book I anticipated a DNF (did not finish).  Levi was an absolute bastard and at one point I got so angry with his character that I sent my blog partner a ranting email about how I could not see this character improving in my eyes and how I would read the book for a little while longer and then chalk it up as not for me.  Then something changed.  The author took this complete bastard (Levi) and showed him in an entirely new light.  His bad behavior was explained satisfactorily in my eyes and the way he went about changing everything about his behavior was written perfectly.  I saw that bastard turn into a very good person who grew to love Jaime and would literally do anything in his power for the man even if it means going against his family in the process or even if it means never again being inside a man.

Jaime considers himself to be damaged in so many ways because of his past.  Levi works hard over time to prove to the man that he is not damaged and that he is worthy of love…. Levi’s love.

Jaime’s past issues are not downplayed in this book in any way.  The author makes a point in showing the reader what he went through where there are very few questions but without going into every minute detail about the abuse. I never felt cheated as far as Jaime and his past sexual abuse was concerned nor did I have to cringe by reading too many details.  His emotions come through clearly and I found myself wanting to cry for the character more than once.  I absolutely loved Jaime from his introduction.

Levi shocked me.  I literally hated his character from the onset.  He would hook up with all these different men not caring if they got off or not.   When he was angry he would lash out at Jaime by saying horrible, inexcusable things. In no way could I see myself changing my mind about his character in the first third of the book.  I could not have been more wrong.  By the time I got to 50% on my Kindle not only was I rooting for him and Jaime but I was rooting for him with his family as well.

Overall, I have to say that this was an outstanding book.  Levi’s transformation takes place over time so I never felt that it was done too quickly. My heart broke for Jaime throughout the entire book.  He loves Levi but feels he can never be man enough for him because of his fears.  The author brought all of this together beautifully and I absolutely loved the ending.  I ended this book still not feeling a lot of love for Levi’s family but there is resolution there as well.

My only real issue has been an issue with every other book I have read by this author and that is the overuse of exclamation points (as mentioned above).  I understand wishing to show excitement at times during dialogue but I find this to be extremely distracting for the reader. If other ratings and reviews are to go by of this author’s work, I am obviously in the minority.  I was able to get beyond it in Between Sinners and Saints for the most part but only because the story between Levi and Jaime made up for it in the long run.

Previous post
The Men With the Golden Cuffs, (Masters & Mercenaries #2), Lexi Blake
Next post
A Shadow of Wings, Linda Gayle