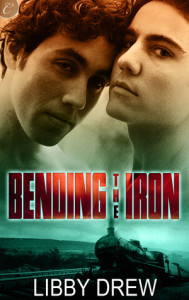 Michael was orphaned at sixteen and forced to live with his grandfather, Pete, in small town America. He had big dreams of going to college and being someone some day. In the ten years since, those dreams have fallen by the wayside. While not happy, he has accepted the fact that he will never leave his grandfather or the conservative small town where he was raised. Pete is a drinker and Michael has to be there to take care of him. Working in the factory that is the town’s bread and butter, he knows that others have it worse than him. If sometimes he wistfully wishes for what could have been? It doesn’t matter. His life and path are set.

Until he meets Eric.

Eric is the new curator for the town’s railroad museum. He is remarkably confident and doesn’t seem to have a care in the world. When Michael meets him both of their worlds are changed instantly. Eric has a past and has come to town to escape a bad relationship. Meeting someone new so soon was not in the cards. Unfortunately (or fortunately) fate has a way of interfering and interfere it does. The lust is instant. Within seconds Michael and Eric want each other and do something about it (that was hot!) A relationship of sorts is started between the two. Eric has taken Pete in to help in the museum and he changes drastically in a way Michael never could have expected. All is going well until Eric starts to push Michael to revisit his old dreams. This is when there is a chink in the relationship. Michael is scared and doesn’t need the pressure being pushed on him by Eric, who knows little about why he never did what he had set out to do years earlier.

This is a nice story. I loved Eric instantly. I do, however, wish that more would have been said about the relationship that he had run from. While there are a few snippets of information here and there, I wish it would have been elaborated on a bit. Michael I wasn’t sure about in the beginning and it took awhile for me to warm up to him. I adored Pete right off.

The sex between Michael and Eric is written very well, though a few pertinent details were left out a few times. This did not take away from it, but I wish they would have been there just the same.

The only thing keeping me from rating it a little higher is the most important detail of all for me when I read romance, a detail that is not there. Even with an epilogue, I had hope for it but it was not to be.

Overall, another really good story by Libby Drew. My only issues (as mentioned above) are the lack of details regarding important situations. Otherwise, a very entertaining read.

I bet I know what that detail was. It is the same one I require. Nice review, Cindi. The book sounds a little different 🙂

You would be correct. That missing detail knocked off a half star in my rating unfortunately. It was still a very good story. I really enjoyed it.

Can I ask what detail is missing or is it an inside joke of sorts?

No, not an inside joke. Just something that I find critical in my romance stories and it was missing in this one. It’s also a spoiler unfortunately.