Behind The Mask, Lisa Worrall 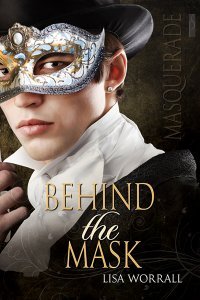 Another terrific read from Lisa Worrall.

Behind the Mask was, essentially, about what a difference four years can make in the lives of two men, Gabe and Tom. It’s also about missing an opportunity, and gaining a second chance, as it were. All written very sweetly, very romantically, and very engagingly by Lisa Worrall. No real review, just some points.

The premise and execution of the story itself.

The recollections, the descriptions of Downe Hall, the clothing, and the period detail of the original Valentine’s Day Masquerade Ball – home, costuming; Brocade jackets and all.

The protagonists, Gabe, his best friend Tom and Gabe’s sister, Sarah, were all nice characters.

Mike’s two letters to both MC’s – they were really gorgeous and funny. I kept seeing/picturing Stephen Fry when Mike’s notes were read, and when Mike was referred to by either Gabe or Tom.

I’m also really rather into a character that is just passing though, finding love for a short while, and creating a conduit for others in doing so. I somehow always seem to find that beautiful, albeit sad at times.

Behind The Mask was a sweet, short read, with charming characters, delightful descriptions of the Masquerade Ball and plenty of British humour and vernacular – bollocks and pillock included. Plus, whilst the sex is minimalist, it’s just right, as it’s intended to be more romantic; HEA included. All in all, this is a lovely story that I would highly recommend to those looking for a nice M/M romance.