Before I Wake, Eli Easton 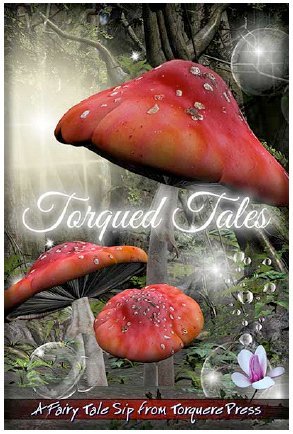 Nurse’s aide Jonesy is drawn to Michael, the comatose victim of a hate crime whose homophobic parents have rejected him. Jonesey sits with Michael, reads to him, and encourages Michael to wake up. Jonesy may not be the smartest guy in the world, but he knows Michael needs him. And if he also thinks Michael is the most beautiful thing he’s ever seen, well, Jonesy knows better than to hope for things that can never happen.

Michael is lost in a dungeon, a dark and terrifying place. His only comfort is the sound of a man’s voice. Can Michael come back? Does he want to? Maybe Jonesy can convince him that some things are worth living for.

There’s a need in me sometimes to read kind, gentle, sweet-natured, decent stories and characters. I hate it when we put a label on someone because they may not have the highest IQ, or the most high-powered job, or…whatever – they’re simple, they’re slow – but I like to think of them as uncomplicated and guileless. Sometimes I just want to be reminded of nice, decent, caring, sweet people.

In Before I Wake there is such a character, nurses aid Jonesy, and I was smitten with him.  Everything I said above is Jonesy.  There is something 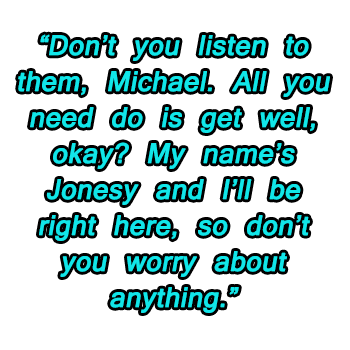 intrinsically good about him, with ineradicable kindness and caring. He is this uncomplicated, positive, gentle soul. When he first sees Michael in the hospital, he is drawn to him. When Michael’s parents come in and pray over him, in a way that suggests the bashing Michael received was punishment for his homosexual lifestyle, Jonesy is hurt for Michael. Besides, it isn’t very nice to pray about someone in that way. On top of this, they decide to switch off the ventilator and let the chips fall where they may. Jonesy is devastated and he does everything he can to make sure Michael knows someone cares.

And Michael keeps on breathing. But now he has been abandoned by his parents, and there is no insurance, so he is placed in a small room without windows. Eventually, if he continues to live, he will be shipped off to a very basic charitable institution. Jonesy continues to make sure Michael knows someone cares. He bathes him, massages and moves him, and talks to him regularly. He asks Michael if he can hear him to please squeeze his hand once for yes, twice for no. It doesn’t work initially but, with time, Michael starts to squeeze his hand. One day Jonesy notices a young man leaving Michael’s room, it must be a friend, maybe he can find out more about Michael. And he does. He was thrown out of home, slept on a couch, and then encouraged to have sex for money to help pay rent. Horrified, Jonesy collects all of Michael’s meagre possessions, including his Lord of the Rings DVD, and puts them in his little room to cheer him up. He brings in a small TV/ DVD player and plays Michael’s Lord of the Rings DVD.

As Michael seems more and more able to communicate through hand 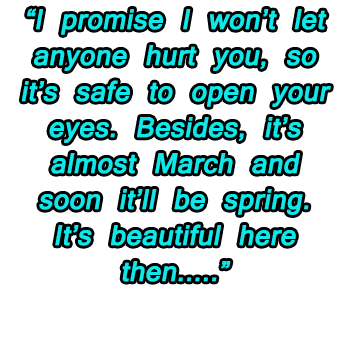 squeezes, and as Jonesy gets more and more attached, he decides that he won’t allow Michael to be shipped off to a facility where he can’t watch over him anymore. Where no one will care, and Michael has been through enough. There is no expectation of Michael, by Jonesy, he simply wants to help him. He does what he can to ensure Michael is taken care of. Jonesy is in a fortunate position because his Aunt Dee, who raised him with love and sage advice, left him comfortable enough financially. And he made me love him even more with what he does.

While most of the short is from Jonesy’s perspective. There are some nice metaphors via imagery in Michael’s sleep state. The reader gets to glimpse a bit of what Michael is experiencing – his fear, feeling like he is trapped in no-man’s land with a light on one side, a door on the other, no feeling behind his ribcage…and a voice. A voice that he feels compelled to know more about. Which keeps him going.

But if I could stand the dungeon a little longer, maybe I could find that voice…

The voice has a name. Jonesy.

I like reinventing or retelling of fairy tales and Sleeping Beauty is definitely the prompt for Before I Wake. It is not a long-ebook at 8,000 words, but it’s heart is much bigger than the sum total of the word count. I was in the mood for some real connection without tons of angst attached and I got that here. It delivered a wonderful lead in Jonesy and a nice muse in Michael. The end is  more a HFN than a HEA, but still nice, and suited the story perfectly. I won’t lie, I would have loved it to have been longer, seen a bit further along, but that’s because I loved the story. However, I am also happy with the way it played out. Sweet and heartfelt.

You know me, I’m all about a good fairy tale. I love when they are retold in a new, unique way. I can tell that I would totally love this story, and Jonesy. I have had this one on my list for awhile. I need to bump it up.

I know. You’re like me. You would LOVE this story. It’s only 8,000 words…start reading, Cindi.