Be Brave (Angel and the Assassin #2), Fyn Alexander 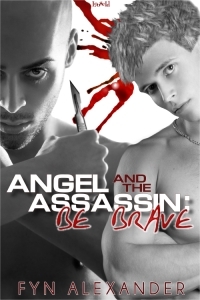 A great addition to the Angel and the Assassin series.

Hired assassin Kael Saunders was supposed to kill Angel Button when Angel witnessed Kael killing his stepfather in America. Instead, Kael brought him home with him to England and made him his boy.  Angel turned 18 on the day of the hit and Kael was 32 at the time.  After months of the two living together… and playing together…. Kael, a powerful Dom, opens up his heart and allows himself to fall in love with the young man.  At the end of the first book, the two have overcome a kidnapping and murder attempts and began their life together as a couple.  In Be Brave, they have been together a few months. Kael has walked away from his dangerous life as a hit man and is now teaching languages and survival skills at the organization that he has worked for for years.  Angel, who wants to follow in Kael’s footsteps in the organization, is going to school and getting an education because Kael refuses to allow him to put himself in danger again.   Angel wants to please Kael so he does what he says.

Kael and Angel fall into a routine.  No more kills for Kael and Angel is doing well in school.  But Kael is accustomed to being a hit man, not a teacher, and his mood starts to reflect this. His handler, Conran, sends him on random hit jobs when his attitude gets where he is more difficult to be around than normal.  This helps until he is sent to pick up a man who is into having sex with children.  Kael must bring this man back alive in order to testify in court.  What Kael finds when he walks into the room is the man in the process of molesting a 9-year-old girl. With a promise to return to the little girl (that he has no intention of keeping), he removes the man and finishes his job.  But the little girl and that promise sticks with Kael and he knows he must return and rescue her even though he’s never had a second thought after jobs before. This is when I truly started to like Kael.  The hard-nosed bastard is still there but now (thanks to his relationship with Angel) he is having second thoughts about leaving innocent victims behind.  Unofficially, he sets out to find the little girl and make good on his promise.  Unfortunately, things don’t exactly go as planned and he is forced into a position of helplessness.  It takes Angel, with the help of a female who Kael has trained, to get him out and to rescue the little girl.  For months Kael has been training Angel in self-defense and firearms.  This comes in handy when it comes time to rescue his ‘daddy’.

I loved this book.  After reading the first one, I was convinced that nothing would change my opinion of Kael.  He was a bastard and I seriously hated his character and my review reflected this rather harshly  I never in a million years thought my opinion would change… but it did… drastically.  In Be Brave, I got to see a softer side of him. His love for Angel is obvious and he lets it be known.  The ‘daddy’ stuff was not as prevalent as it was in the first book but it was still there.  It didn’t annoy me at all this time as I came to a better understanding of the relationship between the two men.  Kael is still controlling and he still comes across as a complete jerk to others but when it comes to Angel, he is a totally different person.  Angel is not quite as immature as he was in the first book though his youth is obvious.  I totally adore him.

This is one of those books that I normally would not have even bothered to read.  If I hate one of the main characters in the first of a series, it’s a good bet that I will not continue to the next book.  Thankfully, I enjoyed the first one enough (even though I despised Kael) to keep going.  I am so glad I did.  Had I not, I would have missed out on an outstanding story.  I am so eager to jump into Sins of the Father, the third in the series.