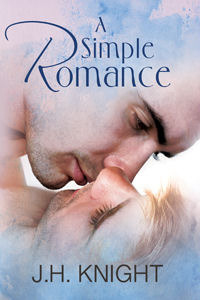 After being burned by his long-term partner a man must get over his fears in order to love again.

Skip is a happy man.  He has been married to the perfect man for eight years.  He has a teaching job he loves, the perfect apartment and even the perfect pet cat.  Everything is going well in Skip’s world until one day suddenly it’s not.  His partner, Monty, has decided that he doesn’t want the domesticity any longer and he packs up leaving Skip hurt and miserable and with a stack of papers stating the domestic partnership is over.  Skip is completely blindsided having never considered that Monty might not be every bit as happy as he was.  They even talked about adopting children. After a few weeks of hiding away from everyone including the sister he is close to and his two best friends he makes the decision to walk away from everything and move back home to his mother.  His ‘Ma” always took care of him and Skip is in desperate need of being taken care of… at least for a little while until he is able to get beyond his misery so he can start living again. He promises to never allow himself to be put in the same position that he had been in with Monty… no more serious stuff and definitely no love or commitment.  He will never allow himself to be hurt like that again.

Paul is a Skip’s former classmate.  Paul had been the only openly gay student at their high school and Skip had always had a secret crush on the other boy.  At that time, however, Skip was dating Faith (his now best friend) and had not come out with anyone though he did later with Faith and his mother.  Paul had left home shortly after high school graduation as did Skip.  Paul, also like Skip, is now back in town and is teaching at the same high school the boys had attended.  When Skip gets a position at the same school it is inevitable that the two men will bump into each other.  When they do, Skip’s former crush hits him right between the eyes all over again.  A dinner date here, a meeting for drinks there and the two men suddenly are all over each other and inseparable.  Like Skip, Paul has had experience with losing a long-term lover but unlike Skip Paul is eager to move on with what he is feeling for Skip.  Skip makes this difficult as he is in constant fear of caring too much… getting too comfortable… only to have that taken away from him suddenly as it did with Monty.  Paul is patient but after awhile that patience wears thin. It takes a little bit of time apart for both men to figure things out.  They do eventually and it’s very sweet when it happens.

Overall, this is a very good book.  The sex between Paul and Skip is written very well and frequent though not so frequent that it took away from the rest of the story.  Monty makes an appearance as I knew he would.  The secondary characters are priceless.  Skip’s mother takes the meaning of accepting to a whole new level as does Paul’s mother.  Skip’s sister and her man are hilarious.  Throw in Faith and her husband who are both Skip’s best friends and you will be laughing out loud quite a bit.  The ending is nice as is the quick epilogue thrown in.

I highly recommend this for those looking for a nice love story, hot sex, hilarious secondary characters and two men who are obviously meant for each other.  A very entertaining read.