A Shot at Forgiveness, Cardeno C. 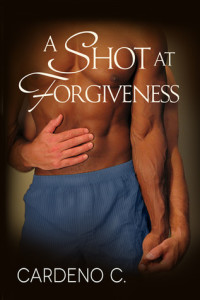 Rafi Steiner went through hell in high school courtesy of bullying by the star basketball player Isaac Jones.  As much as Rafi tried to avoid the huge athlete, Isaac always seemed to be around.  Isaac made it his mission to taunt Rafi at every turn.  There were homophobic comments and slurs.  Rafi was shoved in lockers on a regular basis and was given wedgies regularly.

“I lived in anticipation of the day he’d come up with some way to taunt me for breathing.  Ass. Hole.”

Twelve years and a lot of therapy later, Rafi is an up-and-coming real estate attorney and has put his miserable high school years behind him. He has a nice circle of friends and finally has found the self-esteem that Isaac and his cronies had taken away from him years earlier. He has never had any type of real relationship, choosing to settle with one-night-stands on a regular basis.  Then Isaac makes another appearance and Rafi’s ordered life is turned upside down.

Isaac is a popular basketball player in the NBA, having even been the MVP at one point. He conveniently shows up at a restaurant where Rafi and his friends just happen to be.  Not only does he want to apologize for his behavior years earlier but he wants to have Rafi in his life… forever. The question is will Rafi take a chance with his heart with the one person who made his life a living hell years earlier?

This is a sweet yet humorous story.  The one-liners had me laughing out loud more than once. Initially I wasn’t sure if Isaac deserved a second chance but as the story played out I found myself rooting for him.  The characters are charming.  The sex is hot as hell.  The ending is perfect. A very good read.