A Reason To Believe, Diana Copland 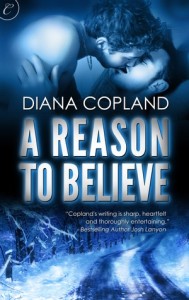 A tough detective, a hot medium and the ghost of a murdered little girl.  An outstanding murder mystery with a bit of romance.

Detective Matthew Bennett does not believe in ghosts so he is shocked to the core when the ghost of 6-year-old Abby presents herself to him at her home just hours after her murder.  Not just presents herself but leads him to her body.  He is so shaken by it that he is taken off the murder case and put on administrative leave by his superior… the same superior who has had Matt on desk duty for the fifteen months following the death of Matt’s work and life partner, Brad. The supervisor is a homophobic bastard who has been after Matt’s job since he was inadvertently outed at Brad’s funeral.  Matt “seeing ghosts” may just be the thing to help him succeed in getting Matt removed from his position.

Even after being taken off the case, Abby makes her presence known to Matt.  He confides this to his sister-in-law and best friend who insists that Matt go with her to see a medium, Kiernan Fitzpatrick, who is holding a large group reading at a local hotel.  Being a skeptic, Matt balks at first but eventually gives in.  After three hours of watching Kiernan “speak to the dead” in a large group of people, the session ends and Matt is ready to leave.  Kiernan has other ideas.  Abby has made herself known to him during the session and he wishes to speak with Matt privately in regards to what he has seen.

Kiernan has been a medium his entire life.  With the help of his older sister, Aiden, he has made a huge name for himself with his private readings, group sessions and a very popular cable television show.  He is funny and quirky. I fell in love with him immediately.  Kiernan is not the typical psychic/medium.  He’s small (around 5’6″) and he wears funny t-shirts with different sayings on them.  My personal favorite (because of my own height) is I’m not short.  I’m fun-sized! He is a bundle of energy and at one point is described in the book as an overgrown puppy. The description is perfect.

Matt grudgingly agrees to meet with Kiernan at his hotel room to discuss Abby’s murder case.  An unusual alliance forms and the two work together to find out who murdered the little girl.  There is instant attraction between Matt and Kiernan but Matt is still mourning the senseless death of his long-term partner 15 months before and is hesitant to move forward.

The murder case is strikingly similar to the real JonBenet Ramsey case in the United States in 1996.

– JonBenet and Abby’s bodies are both found in the basement on Christmas hours after being reported missing and after the basements had already been searched.

– Both girls are 6-years-old at the time of the murder.

– JonBenet and Abby’s parents were both well-off financially and prominent members of the community.

– Both had parents who were immediately accused in the media in a very public way.

– The investigations were both bungled by investigators and evidence either compromised or showed up mysteriously later.

That is where the similarities end.  In the beginning (with the exception of Abby’s ghost making an appearance) I was taken back to the massive media coverage of the real-life unsolved case. I felt that I was reading the actual stories of what had occurred in the Ramsey home. It did not take long in my reading to see that this fictional story was going in an entirely different direction. Thankfully.  🙂

With the help of Abby’s ghost, Kiernan and various secondary characters, Matthew continues the investigation of Abby’s murder even after being ordered to cease the investigation.  Matt and Kiernan gradually get closer though Matt is still mourning Brad and is having a difficult time with the feelings that are suddenly there for another man.

The murder mystery was interesting and it kept me guessing almost to the end.  There were a couple of times when I was shaking my head (I can’t say what they are without giving spoilers) but they were not enough to prevent me from thoroughly enjoying the story as a whole.  The way everything comes together for the resolution was quite good and a bit surprising.

Matt and Kiernan are perfect for each other.  Watching Matt finally realize that it’s okay to move on after Brad was beautiful.  Kiernan is patient and understanding during the entire journey.

You have to seriously suspend any and all belief when you read this book.  I’m not simply referring to the ghost aspect but others as well.  You will find yourself asking “How is that possible?” more than once in regards to specific characters.  Abby was a true pleasure to read about. She’s an adorable little girl who acts like a little girl… even in death.

There is an insta-love aspect to this story but it did not feel like it.  So much happens between the moment that Matt and Kiernan meet and the time they actually become a couple that it seems like much more time has passed than it actually has.  The sex scenes are hot and beautiful at the same time.

This is an outstanding book.  This will go down as one of my all-time favorites of 2012.  This is my first by this author and I can not wait to jump into more by her.  While this ended perfectly (a definite “Aww!” moment) I hope that the author will add a quick short one day so we can catch up with Matt and Kiernan again.  I am eager to see what happens after THE END.

I highly recommend this book.