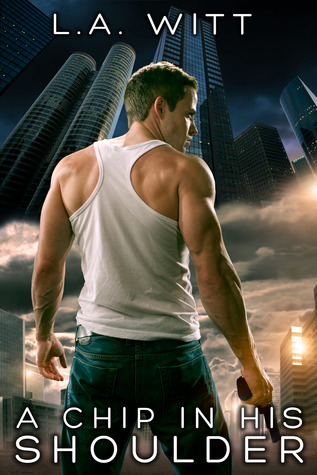 L A Witt never ceases to amaze me. This time it’s Cyberpunk (think dystopian meets high tech) and it’s well done. It’s not long, around 70-80 pages, but it packs a bit into those pages.

My two cents worth.

Liam, part vampire, part machine – he’s full of mods to improve him, help him heal quicker, be a more efficient assassin –  is sent to kill his ex lover and heir to a Cyber empire, Daniel. Daddy is none to happy his son knows too much about his dodgy empire and doesn’t approve. It’s a very well written backstory by the way, it would make any conspiracy theorist proud. Liam is set up, Daniel and Liam join forces and have to leave the better part of town, the Sky, for the seamier part of town, the Gutter. Lots of action on the way. Some world building, which I hope will be expanded on in book # 2, because, while it was pretty good in the pages provided, it could have been edgier to give greater depth and more atmosphere.

It took me a while to warm up to Liam and Daniel but once I did it was all good. Did you have to shoot him, Daniel?

The dialogue was terrific – sharp, sarcastic, witty, obnoxious. Everything I would expect of this style of writing –

“Don’t you judge me until you know what I do with the money,” I snapped. “Enlighten me then.” “If you must know, there’s a serious lack of medical facilities for the working class, so I-” “You murder the rich and bandage the poor?” Daniel laughed. “My my, Liam. Your altruism is positively stunning.“

There was plenty of action escaping one part of town –

He was on his stomach, bracing with his knee and his elbow, his lips pulled into a tight grimace. I was the heavier of the two of us, and blood loss had weakened us both. Worse, my two bullet wounds had ripped apart again, and just holding on like this was agony.

…having to remove a potentially toxic chip in Daniel’s shoulder….ah the title of the book! Love it when the title ties in and Ms Witt did it well.

Some sex, some eroticism, not a lot, (as can be expected given the length and action.) But when it happened it was L A Witt good –

It didn’t help that I was already aroused as I ran my gaze over his body, or that the taste of his kiss was still on my tongue and the vibration of his pulse still lingered on my lips.

His heart pounding as he fucked me hard, hard, harder.

Technically the writing in A Chip in His Shoulder was just right; I have a real love of nanotechnology/ nanobots, and I thought the writing was technical enough, interesting enough, without overwhelming, or (potentially) boring the reader. I bought this book to lead into book #2, Something New Under the Sun, which I’ve pre-ordered. Looking forward to the next instalment for Liam and Daniel.